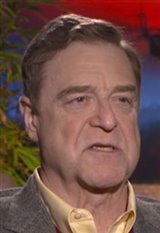 A native of St. Louis, Missouri, John Goodman went to Afton Senior High School and St. Louis Community College before heading to Southwestern Missouri State University on a football scholarship. But an injury compelled him to seek out a less physical major. He chose the drama department, attending classes with such stars-to-be as Tess Harper and Kathleen Turner.

Moving to New York in 1975, he supported himself by performing in children's and dinner theater, appearing in TV commercials, and working as a bouncer.

John made his off-Broadway debut in a 1978 staging of A Midsummer Night's Dream. He later moved to the Broadway stage when he was cast in such plays as Loose Ends and Big River.

In films from 1983, John has occasionally played villains or louts, but his likeable personality endears him to audiences even when his on-screen behavior is at its least sympathetic. He contributed topnotch supporting appearances to such films as Arachnophobia (1990) and Evan Almighty (2007), and has excelled in such starring assignments as King Ralph (1991), The Babe (1992) and The Flintstones (1994).

From 1988 to 1996, John appeared as blue-collar patriarch Dan Conner on the hit TV sitcom Roseanne, a role that earned him four Emmy nominations and a Golden Globe award. He also worked on the successful television movie A Streetcar Named Desire (1995), for which he earned another Emmy nomination. In 2001, he won a People's Choice Award for Favorite Male Performer in a New Television Series for his work on Fox TV's sitcom Normal, Ohio.

He has since continued to land mentionable film roles, including in the Oscar-winner The Artist, the part of John Chambers in Ben Affleck's Argo (2012), the voice of Mr. Prenderghast in the animated feature ParaNorman (2012) and the part of Pete Klein alongside Clint Eastwood in Trouble with the Curve (2012).

He also voiced the character James P. "Sulley" Sullivan in the animated feature Monsters, Inc. 3D (2012)—a 3D re-release of the original film, which originally came out in 2001. John also voiced the character for the film's prequel, Monsters University (2013). Some of his other films include The Internship (2013), Inside Llewyn Davis (2013) and The Monuments Men (2014).

In October 1989 John married Anna Elizabeth Hartzog. They met while he was filming Everybody's All-American (1988). They have a daughter, Molly, born August 31, 1990.