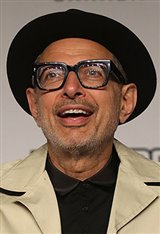 Known for the range of quirky characters he has portrayed, Jeff Goldblum was born in Pittsburgh, Pennsylvania to a family of four children presided over by a strict doctor father. He moved to New York City at 17 in order to study acting at Sanford Meisner's Neighborhood Playhouse.

Jeff got his start with a small role in a production of Shakespeare's Two Gentlemen of Verone and has managed to work consistently ever since. Like most actors who got their start in New York, Goldblum worked heavily in theater for years. It paid off when he was performing in a comic review entitled El Grande de Coca Cola. Director Robert Altman was in the audience and was taken with Goldblum's manic energy. In the mid-70s, Altman cast Jeff in both California Split and Nashville.

Afterwards, Jeff was steadily employed as a bit player in both major and minor features, turning in one of his most notable performances as a nervous houseguest in Annie Hall (1977). The 1980s began well for Jeff with a dynamic role in the hit The Big Chill, which to this day remains a classic for most Baby Boomers. This led to leading roles in such films as Into the Night (1985) where Goldblum played an aerospace engineer opposite Michelle Pfeiffer, and Silverado (also 1985), which cast him as a villainous gambler.

In 1986, he had his first hit movie with David Cronenberg's terrifying sci-fi horror film The Fly (1986), playing a driven scientist whose research turns him into a gruesome mutant. His co-star was his then-wife Geena Davis, whom he met while they were on the set of the comedy thriller Transylvania 6-5000 (1985). The couple divorced in the early '90s and Goldblum then began a relationship with actress Laura Dern that broke up in the mid-90s. In 1989, Jeff made a favorable transatlantic impression in the British romantic comedy The Tall Guy, playing a perpetually unemployed actor who is cast as the lead of a musical about the Elephant Man.

In the 1990s, Jeff's Hollywood clout skyrocketed. With the powerhouse pair of Jurassic Park and Independence Day, Jeff proved he could be a major box office draw. However, by the end of the decade, his popularity waned, and he played supporting roles in small budget films. His first appearance in big budget film in a while was in The Life Aquatic with Steve Zissou (2004), starring Bill Murray, Cate Blanchett and Owen Wilson, and since then has appeared in Man of the Year (2006) starring Robin Williams, The Switch (2010) with Jennifer Aniston, The Grand Budapest Hotel (2014), and Mortdecai (2015).

The veteran actor was seen in the action sequels Independence Day: Resurgence (2016) and Thor: Ragnarok (2017) and Jurassic World: Fallen Kingdom (2018), as well as Hotel Artemis (2018) alongside Jodie Foster.