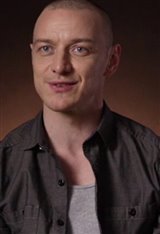 Born in Glasgow, Scotland, James McAvoy did not dream of becoming an actor. The son of a psychiatric nurse and a builder, at the age of seven he and his sister, Joy, went to live with his maternal grandparents when his parents divorced. Though he saw his mother periodically, his father was out of the picture from that point on.

While attending Catholic school, McAvoy was inspired to become a priest or a missionary. Later on he wanted to join the Navy, but that plan was derailed when film director David Hayman came to address his class. Several the students were rude to the guest, so to make up for it, James went up to Hayman afterwards to tell him how interesting his talk was, and to ask if he could get some work experience if the director were doing another film. McAvoy was taken by surprise when Hayman called back four months later asking him to audition. He tried out and won a role in the feature film The Near Room (1995).

A small role in the TV movie An Angel Passes By (1997) followed, and soon after, McAvoy decided to train at the Royal Scottish Academy of Music and Drama. To pay his way, for two years he did the early shift at a bakery as a trainee confectioner before heading off to school each morning. In 2000, at the age of 20, he moved to London and soon after, landed a plum role in Steven Spielberg's acclaimed mini-series, Band of Brothers (2001), which aired on HBO in the States and the BBC in Britain.

In the Emmy award-winning mini-series Children of Dune (2003) he played a lead, followed by a role in the critically acclaimed movie Bright Young Things (2003), the title role in Rory O'Shea Was Here (2005) and a supporting part in his first big budget motion picture Wimbledon (2004), starring Kristen Dunst and Paul Bettany.

Switching gears, he was nominated for a 2004 British Comedy Award for the Channel 4 series Shameless, in which he starred opposite Anne-Marie Duff, whom he later married.

It was his role as Dr. Nicholas Garrigan in The Last King of Scotland (2006) opposite Forest Whittaker that brought McAvoy the most international acclaim he'd had to date, including a BAFTA nomination and British Actor of the Year nomination from the London Critics Circle Film Awards. He went on to win the 2006 BAFTA Rising Star Award and the Chopard Trophy at the 2007 Cannes Film Festival as Male Revelation.

Since then, this in-demand actor has filmed starring roles in Atonement (2007) opposite Keira Knightley (for which he received a Golden Globe nomination), Wanted (2008) with Angelina Jolie and was directed by Robert Redford in The Conspirator (2011). He also starred as Professor Charles Xavier in the X-Men prequel, X-Men: First Class and went on to reprise his role in X-Men: Days of Future Past (2014), X-Men: Apocalypse (2016) and Dark Phoenix (2019).

James then played the title role in the horror drama Victor Frankenstein alongside Daniel Radcliffe in 2015. In 2017, James teamed up with M. Night Shyamalan for the horror thriller Split, then reprised his role in Glass (2019). He also lent his voice to the animated film Sherlock Gnomes (2018).

In the horror sequel IT: Chapter Two (2019), James played the grown up version of Bill Denbrough, who was played by Jaeden Martell as an adolescent in the first one and in the sequel.

In his spare time, James enjoys mountain climbing. He lives in London and has a son, Brendan, born in 2010, from his marriage to actress Anne-Marie Duff. In May 2016, after almost 10 years of marriage, the couple jointly decided to divorce.