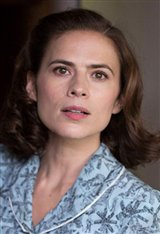 Hayley Atwell was born in London, England. She has dual citizenship in both the United Kingdom and America. Her mother, Allison Cain, is a professional motivational speaker, while her father, Grant Atwell, is a photographer, massage therapist and shaman. When Hayley was two her parents obtained a divorce, and Hayley stayed in the U.K. with her mother, although she spent summers in Missouri with her father.

Hayley graduated in 2005 from Guildhall School of Music and Drama. Since then Hayley has gone on to appear on stage, television, radio and film.

After several television appearances, she made her movie debut in Woody Allen’s feature film Cassandra’s Dream in 2007, alongside Ewan McGregor and Colin Farrell.

Her biggest break came when she landed the role of Peggy Carter in Captain America: The First Avenger. When the 2011 hit summer blockbuster was released, comic fans fell in love with Hayley’s portrayal of the character. Marvel has since spun Peggy Carter off to her own television series, titled Agent Carter. Originally the show was slated to be a 12-episode miniseries, but the show was so well received that it was revived for a second season. Hayley also reprised her role as Peggy Carter in Ant-Man in 2015 and played Cinderella’s mother in Cinderella (2015).

She went on to play Hayes Morrison in the ABC-TV political drama series Conviction (2016 to 2017) and Margaret Schlegel in the STARZ mini-series Howards End (2017 to 2018).

In the Disney feature Christopher Robin (2018), Hayley played the wife of the title character, played by Ewan McGregor.