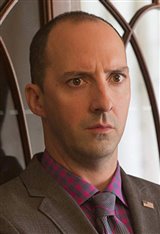 Born Anthony Russell Hale on September 30, 1970 in West Point, New York, Tony Hale is an American actor and comedian best known for his roles on the hit shows Arrested Development and Veep. His parents are Rita, a former assistant to State Representative Kathy Ashe, and Mike Hale, a nuclear and atomic physics teacher who had also served in the military. Though born in West Point, Tony grew up in Tallahassee, Florida, where he began his passion for acting at the Young Actors Theatre. He would go on on to participate in several theatrical and musical productions.

In 1988 he graduated from Leon High School before moving on to Samford University in Birmingham, Alabama, where he graduated with a degree in journalism in 1992. Tony would later attend the School of Communication and the Arts at Regent University in Virigina, to complete his graduate studies in 1995 before moving north to New York City. There, he helped found The Haven, a weekly meeting group for artistically minded Christians. It was also during this time in New York City in which he studied acting with the theatre company, The Barrow Group.

His first official acting credit was in the TV series Ghost Stories (1997) as Billy Thorpe in the episode “Personal Demons.” Tony would appear in several other TV shows such as Dawson’s Creek (2001), The Sopranos (2001), and Sex and the City (2001). He would land his first recurring and main role in Mitchell Hurwitz’ cult classic comedy show Arrested Development as Buster Bluthe.

From there Tony would expand his work into smaller film roles in major films such as Larry the Cable Guy: Health Inspector (2005), RV (2006), Stranger Than Fiction (2006). Following Arrested Development’s cancellation in 2006, Tony continued to find work on the small screen with a recurring role as Simon on Andy Barker, P.I. (2007), a starring role as Stuart Grundy on Ctrl (2009), and as the recurring character Emmett Milbarge on Chuck (2008-2010).

In 2013 Netflix revived Arrested Development for a fourth season, bringing back the entire cast. He would go on to reprise his role again in the fifth season, which was divided into two parts on Netflix in 2018 and 2019. Tony would also join the voice cast for the animated series Sanjay and Craig (2013-2016), primarily voicing the role of Mr. Noodman.

In 2019, his popular HBO political comedy show Veep came to an end. On the show he played the character of Gary Walsh, the personal assistant to Vice President-Turned-President Selina Meyer, played by Julia Louis-Dreyfus. It was in the show’s second season when Tony was nominated for, and won, a Primetime Emmy for Outstanding Supporting Actor in a comedy series. He would be nominated for the same award twice more, losing in 2014, but winning his second Emmy the following year.

Tony can be heard lending his voice talents to Disney and Pixar’s highly anticipated Toy Story 4 (2019), playing the role of new toy Forky. He also appears in the Disney+ series The Mysterious Benedict Society (2021) as Mr. Benedict.

Tony is married to Martel Thompson, whom he wed in 2003, and together they have one daughter, Loy Ann Hale.