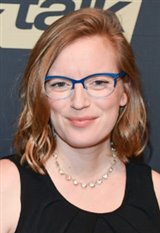 Born the youngest by eight years of five children to mother Diane Polley, Sarah began acting at age five when she appeared as Molly Monaghan in Disney's One Magic Christmas (1985). Her older brother, Mark Polley, had also been a child actor, playing a lead role in the Canadian television series A Gift to Last (1976 to 78). Showbusiness was a family business: her father Michael Polley was an actor, another brother, John, is a casting director and her mother, who died of cancer in 1990, was a casting director and actress. About her mother's death, Sarah has said, "I find it hard to relate to people who haven't [experienced the pain of losing someone]. There's something less vivid about them. I see these people with both parents alive and think, 'There's so much pain waiting for you.' I'm so afraid for them because everything is waiting. It's not like there's going to be anything familiar about that pain."

Sarah's first big break came at the age of eight, when she starred as Ramona in the television series of the same name. In her fifth feature film, The Adventures of Baron Munchausen (1989), she worked alongside the likes of John Neville, Eric Idle, Uma Thurman, Robin Williams and Sting, as well as her father, but it was the beginning of the end of her love for acting. She was made to run through tunnels while explosions went off around her, and she didn't feel safe.

In 1988, Sarah played Jody in Sullivan Entertainment's TV movie Lantern Hill. Her performance as the little cockney waif won her a Gemini Award. Sullivan Entertainment was so impressed by her that she was cast to star in their next production, the long-running television series Road to Avonlea (1989 to 1996), in the starring role of Sara Stanley. She tired of the role by the time she was 12, disdaining the show because of its commitment to family values, and asked to be written out of the script, so during the sixth season her character moved to France to study writing. At about the same time, 14-year-old Sarah left the home where she lived with her father, whom she later claimed was somewhat neglectful and left her to her own devices. She moved in with a man nearly 20 years her senior (in an apartment she'd bought). She later came to regret the situation, which was illegal, saying her father should have stopped her from making such a move.

In Atom Egoyan's Exotica (1994) she played a small role as a girl hired to baby-sit a child that has long been dead. Three years later, Egoyan cast her again, this time in a starring role in The Sweet Hereafter.

Despite her success, Polley claimed acting was not something she saw herself doing forever. In an interview with CBC's The National she once stated: "The thought that I would be an actor when I grew up didn't even enter my mind. It was just sort of something I wanted to do for fun. And it sort of remained like that and still is. And I don't think I ever had any big transition where I decided I'm not going to be an actor, this isn't what I want to do with my life. I just sort of always knew that it wasn't my thing. It was just sort of something that I dabbled in and thought was sort of nifty."

Although she at one time hoped to attend university, Polley dropped out of high school to devote more time to left wing political activism. She transitioned into directing, and her first feature film — Away From Her (2006), was based on an Alice Munro story.

In the Polley home, Sarah's older siblings teased her about not looking like her father, Michael. Because her mother had been performing in a play in Montreal at about the time Sarah was conceived, in her twenties, Sarah began to look into it. It was believed that her biological father was one of the actors from the play. While asking various people in Montreal about that time, she met Harry Gulkin, a Canadian film producer. He admitted to being Sarah's father, but said that because Diane decided to stay with her husband Michael, Harry kept quiet about it, only getting occasional photos of Sarah sent to him from Diane when she was a child. Sarah documented this in her movie, Stories We Tell (2012).

After several affairs with older men, including actor Stephen Rea (33 years her senior) with whom Sarah co-starred in Guinevere (1999) and director Michael Winterbottom (18 years her senior), in September 2003, she married longtime companion, film editor David Wharnsby. However, the marriage didn't last long.

In 2011 she married David Sandomierski, with whom she has two children.