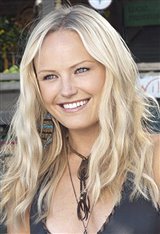 Born in Stockholm, Sweden, Malin Akerman and her family moved to Toronto, Canada when she was just two years old due to her father's job. At the age of five, the adorable little blonde began modeling and appearing in TV commercials. When she was six, her parents separated, but Malin continued to live in Toronto with her mother. She won the Ford Supermodel of Canada search when she was 17, and began an international career.

Returning to Toronto to study psychology at York University, her desire to be in the spotlight pulled her focus away from the classroom. Malin made her acting debut with a guest role on the long-running series Earth: Final Conflict, shot in Toronto. Guest appearances in other series based in Canada, such as The Others, Relic Hunter, Doc and Twice in a Lifetime followed, as well as small roles in films such as The Skulls (2000) and Harold & Kumar go to White Castle (2004).

Like many ambitious actors before her, Malin felt Hollywood's draw and made the trip to Los Angeles to give her luck a shot. She landed a regular role in The Comeback, a sitcom created by and starring Lisa Kudrow of Friends fame. The series didn't last long, but it gave Akerman the opening she'd been hoping for.

After guest appearances on Love Monkey (starring fellow Canadian Thomas Cavanagh) and Entourage, Malin began landing substantial roles in major motion pictures, including The Brothers Solomon (2007), The Heartbreak Kid (2007), 27 Dresses (2008), Watchmen (2009) and The Bang Bang Club (2010). She was also seen with Paul Rudd and Jennifer Aniston in the film Wanderlust (2012) and as part of the star-studded cast of Adam Shankman's Broadway-based film Rock of Ages (2012). More recently, she starred in Rampage (2018) alongside Dwayne Johnson.

While filming the indie flick The Utopian Society, Malin met film editor Francesco Sondelli, who had formed a music band "Ozono." She was invited to be the lead singer for the band, which changed its name to "The Petal Stones." In 2007 she married Roberto Zincone, the band's drummer. Their son, Sebastian, was born April 16, 2013, but by November of that year, Malin and Francesco had filed for divorce. She is currently engaged to British actor Jack Donnelly.