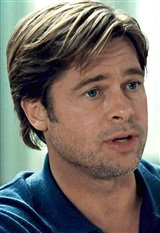 If Brad Pitt could bottle what he brings to the screen he could make millions. But what would that mean since he already makes millions?

Born in Shawnee, Oklahoma, Brad dropped out of an advertising and graphic design program at the University of Missouri, packed up his Datsun, and headed to Hollywood to become a star. Actually, he told his parents and friends that he was off to attend the Art Center College of Design in Pasadena. After all, it sounded kind of silly to say you were heading to Hollywood to act in movies. It probably even sounded a little silly to Brad himself when he found himself standing on the sidewalk wearing a chicken costume for El Pollo Loco restaurant and driving strippers to bachelor parties around Los Angeles.

Soon after landing guest roles on the sitcoms Head of the Class and Growing Pains, Dallas came calling and Brad found himself playing an ongoing role as the hormonally charged boyfriend of Priscilla Presley's daughter on the long-lived prime time soap. His hormones again came into play when he made the most of a brief appearance as a studly hitchhiker who sexually awakens Geena Davis in Thelma & Louise. About his lovemaking scene with Davis in that film, Brad says, "They spend so much time beforehand doing things like covering up the zits on your ass, that during the actual scene, you're numb. All I remember is feeling very good driving home that night."

He should have felt pretty good because when that scene hit movie screens across the country, Brad almost overnight was turned into a star. Not long after, People magazine crowned him "The sexiest man alive," a fact that millions of female fans had already recognized. As for what Brad thinks of himself as an actor rather than a sex symbol, he says, "I'm a good actor, I'm consistent, but I'll never be a great actor."

Despite what he says, Brad won a Golden Globe award as well as receiving an Academy Award nomination for his supporting role in Twelve Monkeys (1995). His talent was also recognized when he played against type in Snatch (2000), as a gypsy named Mickey who goes beserk when his mother is killed. Although he teamed up with other big box office names such as Julia Roberts in The Mexican (2000) and Robert Redford in Spy Game (2001), neither film was a hit. However, the action adventure Troy (2004), in which he starred as Achilles, made over $133 million at the box office and was the basis for Brad winning the 2004 Teen Choice Award as Choice Movie Actor—Drama/Action Adventure.

In 2009 he received his second Academy Award nomination, this time for his work in The Curious Case of Benjamin Button (2008). And just three years later he received an Academy Award nomination for best actor for his portrayal of Oakland A's general manager Billy Beane in Moneyball (2011). That was followed up by Killing Them Softly in 2012. His later films include World War Z (2013), The Counselor (2013), Oscar nominated film 12 Years a Slave (2013), Fury (2014), By the Sea (2015), directed by his wife Angelina Jolie, and The Big Short (2015).

The heartthrob can be seen in the dramedy War Machine (2016) alongside Tilda Swinton and Anthony Michael Hall, and in the action drama Allied (2016) alongside Marion Cotillard. More recently, he can be seen in Quentin Tarantino's Once Upon a Time in Hollywood (2019) alongside Leonardo DiCaprio. The film received critical acclaim and Brad won his second Golden Globe award for Best Supporting Actor for his work in the film. He also won his first Academy Award and even scooped up awards at the BAFTAs and Screen Actors Guild Awards.

A long-time vegetarian, Brad married actress Jennifer Aniston in 2000. They divorced in 2005, after Pitt began seeing his Mr. and Mrs. Smith (2005) co-star, Angelina Jolie. He has three children with Jolie—daughter Shiloh Nouvel Jolie-Pitt born on May 27, 2006 in Namibia, Africa and twins Knox Leon Jolie-Pitt weighed 5 lbs. 3 oz. and Vivienne Marcheline Jolie-Pitt born on July 12, 2008. Brad has also legally adopted Angelina's three adopted children. In 2014, Brad and Angelina were married. However, the couple filed for divorce in 2016.