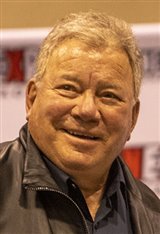 Best known for portraying Captain James T. Kirk on the popular sci-fi Star Trek television show and films, Shatner has played many other characters throughout his long career, which have been shadowed by the star fleet character.

Native to Montreal, Shatner developed an early interest in acting and began working professionally at the CBC even before his teens. While attending McGill university for a business degree, he thought he would eventually wind up working in his father's clothing manufacturing business. Instead he took a job as assistant manager at a Montreal playhouse.

The work led him to his first love, and he performed for the next three years with the Canadian Repertory Company in Ottawa. He even joined the prestigious Stratford Festival in Ontario as an understudy for a time.

It was not long before his stage work was noticed by New York critics, and Shatner was introduced to the world of live television shows. After performing a number of roles in shows like Playhouse 90, Shatner was given the role of his life.

He landed a role on a series called Star Trek, about a crew that travels across the galaxy interacting with alien species. The show wasn't popular with viewers, and after it folded, Shatner's wife left him. He found himself living in a truck bed camper working on numerous projects doing bit parts.

When Star Trek went into syndication, it suddenly took off, becoming enormously popular with viewers from around the world. Shatner suddenly became a star and found himself back in the captain's seat in 1979 with the original crew as they prepared to make a feature, Star Trek: The Motion Picture. The movie was a hit and led to six sequels (with the original cast); three television shows based on the Star Trek universe; annual conventions all over the world; hundreds of books and novels, and video games.

Pursuing his love of horses, he became a successful horse breeder. He has long been a dedicated breeder of quarter horses as well as had success with the exquisite American Saddlebreed, developing and owning the world champion, Sultan's Great Day. He keeps his equines on a 360 acre horse farm in Kentucky.

In addition, Shatner is a spokesperson for such charities as The Juvenile Connection Project, Tourettes Syndrome, Toys for Tots and is active in the campaign against drug abuse in society.

In May 2011, he received the Lifetime Artistic Achievement Award at the Canadian Governor General's Performing Arts Awards. A month later, his alma mater, McGill University, gave Shatner an honorary doctorate.

Married four times, his third wife, Nerine Kidd, died in August 1999 when she drowned in the family pool. He has three daughters, Lesley, Lizebeth and Melanie, and one grandson, Daniel.