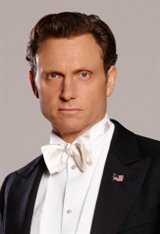 Being native to Los Angeles, and born into a multi-talented family, Tony Goldwyn would only have to say the word and he was in the movie industry. His father was Samuel Goldwyn Jr., a producer who continued his father's independent production company, Samuel Goldwyn Productions. His other grandfather was a playwright, and his grandmother, Frances Howard, was an actress on Broadway. When his brother, John Howard Goldwyn, took on the family business, Tony decided to go for acting.

After receiving his B.F.A. from Brandeis University, Goldwyn trained to be an actor at the London Academy of Music and Dramatic Art. His first major film was 1987's Gaby: A True Story, in which he was eighth-billed. His breakthrough feature was 1990's Ghost, in which he played Carl, the "lying snake" who sets up the murder of his best friend and then callously moves in on the dead man's grieving girlfriend.

A master at playing charming-but-shallow yuppies, Goldwyn went on to appear in films ranging from The Pelican Brief (1994) to Nixon (1995) to the thriller Kiss the Girls (1997). In 1998, Goldwyn played astronaut Neil Armstrong in the made-for-TV docudrama series From the Earth to the Moon; the following year, he made his directorial debut with the similarly-titled A Walk on the Moon.

In 1999, he voiced the title role in the Disney film, Tarzan. "Tarzan is a great role because the range of the character is enormous," he says. "In bringing the character to life, my main concern was to make him real."

On the New York stage, he was seen in The Dying Gaul. He starred at the Second Stage in the 1992 hit comedy Spike Heels and in 1991 won an Obie Award for the off-Broadway production of The Sum of Us. He has spent several seasons at the Williamstown Theater Festival, appearing in Carthaginians, in the title role in Tom Jones, and in Oedipus, Peer Gynt, Uncle Vanya, and Vieux Carre. He made his New York debut in Digby. Other theater credits include The Lion in Winter, The Real Thing, and Pride and Prejudice.

Audiences were able to see more of the actor when he appeared in the romantic drama Bounce and in the Arnold Schwarzenegger sci-fi thriller The Sixth Day. He appeared in The Last Samurai (2003), starring Tom Cruise. Goldwyn directed his third film, Someone Like You, starring Ashley Judd and Hugh Jackman. He soon became known as President Fitzgerald Grant when he starred in the popular TV series Scandal (2012). Recently, he starred in Divergent (2014) alongside Shailene Woodley and Theo James, as well as the film's follow-up Insurgent (2015) and the thriller The Belko Experiment (2017) as well as Mark Felt: The Man Who Brought Down the White House (2017).

He and his wife, production designer Jane Musky, have two daughters, Anna and Tess Frances.