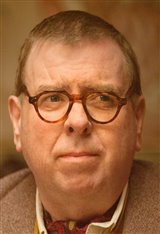 Born in the United Kingdom, Timothy Spall worked for years with the Royal Shakespeare Company. Some of his stage credits include The Merry Wives of Windsor, Nicholas Nickleby, Night of the Burning Pestle, and Suicide. He has also worked at the Royal National Theatre, performing in such plays as Saint Joan, Le Bourgeois Gentilhomme, and Robert Lepage's acclaimed production of A Midsummer Night's Dream.

Timothy first got into film at the age of 22. He landed a small part in Quadrophenia (1979) as the projectionist. In 1992, he landed a co-starring role on the TV movie, Home Sweet Home, but it wasn't until the multi-award winner Secrets & Lies(1996), that Timothy began to be noticed. Timothy played the dumpy, weak-willed Maurice who was torn between the love for his sister and wife.

For his role as Mr. Venus in the highly acclaimed BBC adaptation of Charles Dickens' Our Mutual Friend, Timothy received a BAFTA Award nomination for Best Actor.

Timothy started out the new millennium with a bang, with a major role in Topsy-Turvy (1999), lending his voice to the animated Chicken Run (2000) and working in Kenneth Branagh's latest Shakespeare flick, Love's Labour's Lost (2000).

He then went on to land a role in The Last Samurai (2003) with Tom Cruise, played Peter Pettigrew in Harry Potter and the Prisoner of Azkaban and played Mr. Poe in Lemony Snicket's A Series of Unfortunate Events (2004).

He was named an Officer of the Order of British Empire (OBE) by Queen Elizabeth on New Year's Eve, 1999. He and his wife Shane have three children.