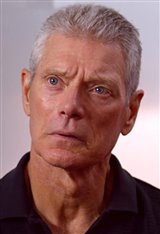 A native New Yorker, Stephen Lang began his career in theater after graduating from Pennsylvania's Swarthmore College. He performed in a variety of plays in New York before making his screen debut in the TV movie We're Fighting Back (1981). He returned to Broadway to play Happy in the 1984 revival of Death of a Salesman alongside Dustin Hoffman, then reprised his role in the 1985 TV version. The same year, Lang made his feature film debut in Twice in a Lifetime (1985), starring Gene Hackman and Ann-Margret.

In 1986, he landed a regular role on the NBC weekly hour-long drama Crime Story, co-starring with Bill Campbell. When the series ended in 1988, Lang kept working steadily on television, films and in theater. In 1993 he landed the plum role of Ike Clanton in Tombstone (1993), starring Kurt Russell and Charlton Heston, as well as the role of General George Pickett in Gettysburg (1993), alongside Martin Sheen and Bill Campbell. His roles grew progressively larger as he appeared in a variety of TV movies such as The Mother (1994), A Season of Hope (1995) and Escape: Human Cargo (1998).

In 2000, Lang found himself again teamed up with Bill Campbell in the CBS-TV series The Fugitive, playing the One-Armed Man to Campbell's Dr. Richard Kimble. Despite the high quality of the show, unlike the original Fugitive TV series, it only ran one year, and Lang returned to feature film work, appearing in After the Storm (2001), starring Benjamin Bratt, and D-Tox (2002), with Sylvester Stallone. In the Civil War drama Gods and Generals (2003), Lang played General "Stonewall" Jackson, with a cast that included Robert Duvall and Lang's old friend, Bill Campbell.

In 2009, Lang's star profile rose astronomically after he appeared in Avatar, the Oscar-winning James Cameron sci-fi fantasy flick which went onto become the highest-gross film of all time.

Lang and his wife have four children: Nora, Grace, Dan and Lucy. He has narrated more than 75 audio books (including Jeff Shaara's Gods and Generals) and won an Audiofile Earphone award for his work. Other awards include the Helen Hayes award for his portrayal of Colonel Jessep in the stage play A Few Good Men, as well as the Joseph Jefferson award and several Tony, Drama Desk and Outer Critics Circle award nominations for his numerous stage roles.