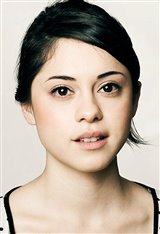 Rosa Bianca Salazar was born in Washington D.C. to Peruvian parents and raised in nearby Greenbelt, Maryland. As a young adult she moved to New York and found early work in entertainment doing various comedy sketches for the TV series CollegeHumor Originals from 2010-2012.

After moving to Los Angeles to pursue an acting career she landed recurring roles on hit shows such as FX’s American Horror Story as Maria, and on NBC’s Parenthood in the role of Zoe DeHaven. In the following years she landed bit roles on various TV shows such as Ben and Kate and Body of Proof as well as the video game Batman: Arkham Origins, while slowly making her way into cinema.

Some of her earlier credits include the biopic Jamesy Boy and the comedies Jerked (2014) and Search Party(2014). It wasn’t until 2015 that Rosa would begin to land bigger roles such as Madeline in the dramedy film Night Owls, co-starring alongside Adam Pally once again after Search Party, as well as the supporting role of Brenda in director Wes Ball’s adaptations of James Dashner’s Maze Runner young adult novel series.

Rosa would continue to expand her portfolio of work in cinema and on television in the coming years with a recurring role on the FXX series Man Seeking Woman, as well as supporting roles in films such as Submerged (2016), CHIPS (2017), The Kindergarten Teacher (2018), and Bird Box (2018).

During this time, she would land her first starring role in Alita: Battle Angel (2019), the live-action adaptation of the Japanese manga series Battle Angel Alita, which was originally scheduled for a summer 2018 release before being delayed twice before releasing for Valentine’s weekend in 2019.