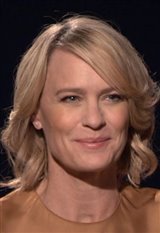 Robin Wright was born in Dallas, Texas, but grew up in San Diego, California. She started her professional career as a model at the tender age of 14, both in Paris and Japan. At age 15 she began to date actor Charlie Sheen. After finishing the high school she decided to become an actress.

She got a role in the daytime series Santa Barbara, for which she was nominated three times for a Daytime Emmy. Meanwhile, Wright made an engaging movie debut in the blockbuster hit The Princess Bride (1987). She landed the title role as the ever-imperiled Princess Buttercup. Thanks to the success, she got the starring role in Denial (1991) alongside Jason Patric, with whom she fell in love.

In 1991 she was offered the role of Maid Marian in Robin Hood: Prince of Thieves (1991), with Kevin Costner. However, news of a pregnancy forced her to back out. Wright was back to Hollywood the next year with one of the best roles of her career: she played Tara in The Playboys (1992). Then a part in Toys (1992) with Robin Williams enabled her to prove she was also capable of performing a comical character.

Robin Wright's finest film hour was her portrayal of the emotionally-scarred best friend of Tom Hanks in the Oscar-winning Forrest Gump (1994). Starring alongside Hanks and Sally Field, Gump became the top-grossing movie of the year. For her performance as Jenny, she earned a Golden Globe nomination.

She got a small role in The Crossing Guard (1995) alongside Jack Nicholson and Anjelica Huston. After turning down 14 projects, including Batman Forever and Sabrina, she played the title role of Moll Flanders (1996), directed by Pen Densham. Her co-stars were Morgan Freeman and Stockard Channing.

In 1998 she worked with Penn and Kevin Spacey in the film Hurlyburly. She returned to the lead spotlight with the romance Message in a Bottle (1999) in which she got the chance to work with Kevin Costner. She also starred with three other blondes—Michele Pfeiffer, Renée Zellweger and Alison Lohman—in White Oleander (2002).

Moving into the 2010s, she worked on the Oscar-nominated Moneyball (2011), the Oscar-winning mystery drama The Girl with the Dragon Tattoo (2011), the drama Adore (2013), and began stepping into the role of Claire Underwood in the highly successful political drama series House of Cards, opposite Kevin Spacey. For her performance in the series, Robin won a Golden Globe in 2014 and earned nominations in 2015 and 2016. She also received Emmy nominations from 2013-2016.

Her marriage to Penn ended in divorce in 2010. Prior to Penn, Wright was married to actor Dane Witherspoon. She currently lives in Pacific Palisades, California, and owns two oil wells in Texas.