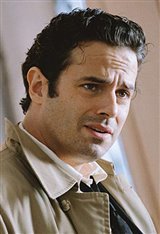 Born in Hamilton, Ontario, Luke Kirby began acting in various theater productions as a teenager before being accepted to the acting program at the National Theatre School of Canada. After graduating in 2000, he landed roles in two projects: the CBS TV movie Haven starring Natasha Richardson, and the feature film Lost and Delirious (2001). He then played Jim Morgan in Halloween: Resurrection (2002) starring Jamie Lee Curtis, followed by a starring role as a young man afraid to tell his traditional Italian parents that he's gay in Mambo Italiano (2003). Other feature film credits include Shattered Glass (2003) with Hayden Christensen, Luck (2004) with Sarah Polley and Window Theory (2004) with Paul Johannson.

Luke also played a regular role on The Movie Network's TV series Slings and Arrows (2003) starring Paul Gross. When not performing in front of a camera, Luke returns to the stage, and was nominated for a Dora Mavor Moore award as Best Actor for his role in the Factory Theatre's production of Geometry In Venice in Toronto. In New York City, he played Patroclus in the Theatre for New Audience's production of Troilus and Cressida, then returned to Toronto to take a role in the Canadian Stage production Habitat and the Tarragon Theatre's The Good Life.

Off the stage, Luke has starred in episodes of the television series Tell Me You Love Me and Cra$h and Burn. He also appeared in the 2011 Genie-nominated film Take This Waltz opposite Michelle Williams, the 2012 thriller The Samaritan alongside Samuel L. Jackson, Touched With Fire (2016) with Katie Holmes and A Dog's Purpose (2017) starring Dennis Quaid. Most recently he appeared in the M. Night Shyamalan's Glass (2019) starring James McAvoy, Samuel L. Jackson and Bruce Willis.

Luke keeps busy on the small screen as well, playing comedian Lenny Bruce on Amazon Prime's Golden Globe-winning series The Marvelous Mrs. Maisel (2017 to 2018), and Gene Goldman on the HBO series The Deuce (2018 to 2019).