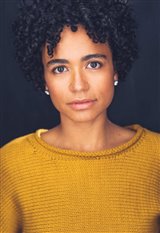 Lauren Ridloff is an American actress best known for her work on The Walking Dead.

Lauren was born in Chicago, Illinois to a Mexican-American father and an African-American mother. Because Lauren was born deaf, her parents thought she had a developmental delay. It was only when she was two years old that they learned that she was deaf. She attended the Holy Trinity School for the Deaf, which is now a part of the Children of Peace Catholic School. After completing school, Lauren attended the Model Secondary School for the Deaf in Washington, D.C. There she started to explore the arts, becoming more involved with drama classes.

Following high school, Lauren went on to attend California State University, Northridge because of its National Center on Deafness, where she majored in English, focusing on creative writing. She graduated with her Bachelor of Arts in 2000. Afterwards, Lauren went to Hunter College in New York to study education, graduating in 2005 with her Masters Degree.

She taught kindergarten and first grade at Public School 347 in Manhattan for some time before she left her job to take care of her two sons.

Lauren made her professional acting and big screen debut in 2011, playing Fatima in If You Could Hear My Own Tune (2011).

In 2017, Lauren appeared in the mystery drama film Wonderstruck (2017), playing the role of Pearl, The Maid. The film received critical acclaim, including a Palme d'Or nomination at the Cannes Film Festival.

Initially hired to tutor director Kenny Leon in American Sign Language, as he was producing a revival of the 1980 play Children of a Lesser God (2018), Lauren was eventually cast in the role of Sarah Norman in the Berkshire Theater Group production of the play. Lauren received critical praise once she got used to using her voice again, earning herself a nomination for a Tony Award for Best Actress in a Play, a Drama League Distinguished Performance Award nomination, and an Outer Critics Circle Award nomination for Outstanding Actress in a Play.

In 2019 she played Diane in the critically acclaimed Oscar-nominated film The Sound of Metal (2019).

She most recently appeared in the role of Makkari in the Marvel film Eternals (2021).

Before delving into the world of entertainment, following her graduation from California State University, Northridge, Lauren was crowned Miss Deaf American in the National Association of the Deaf's Miss Deaf America competition.

Lauren married Douglas Ridloff in 2006. The two have two boys together, who are both deaf. ~Sean Olegario