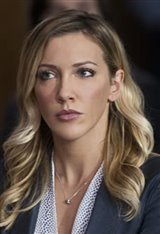 Born Katherine Evelyn Benedon in Los Angeles, Katie is the daughter of '70s pop star David Cassidy and model Sherry Benedon. She began taking singing, piano and guitar lessons as a child and performed in local musical theater productions, as well as being a cheerleader at school. At 15, she signed she signed with Artemis Records, where she met her current boyfriend, Jesse McCartney, who was at that time a member of the boy band Dream Street and who went on to become a teen idol in the same vein as her father, with a starring role on a hit TV show and a successful recording career.

Katie released a CD single, a cover of her father's hit Partridge Family song "I Think I Love You" in 2002, but was openly criticized by David for recording it without asking him first.

She turned to modeling for companies such as Abercrombie and Fitch in 2003 and made her television acting debut with a guest shot on The Division that same year. Additional roles followed in television and films, such as Listen Up (2005), The Lost (2005), and 7th Heaven (all 2005), where she played a recurring role as Martin's classmate, Zoe.

Her first role in a major motion picture was in Columbia Pictures' thriller When a Stranger Calls (2006). Work in other feature films quickly came her way, including playing Adam Sandler's daughter in Click (2006), as well as supporting roles in films such as Taken (2009) and A Nightmare on Elm Street (2010).

However, Katie is probably best known for her starring role on the hit CW TV series Arrow (2012-2020).