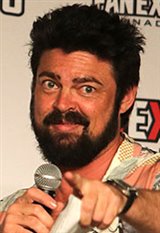 Karl Urban's introduction to acting came at the age of eight, when he delivered a solitary line on a New Zealand television program. It wasn't until he completed high school that Karl returned to that world—writing, directing and starring in various stage and film productions. In 1993 Karl was offered a role on the New Zealand soap opera Shortland Street just as he was about to begin his postponed studies at Victoria University. After two seasons on the soap, he went to school for one year, then left to pursue his acting career full-time.

Karl made several guest appearances on a number of TV series, including the Pacific Renaissance Pictures productions Xena: Warrior Princess and Hercules: The Legendary Journeys. He also starred on a children's program called Riding High, where his love of horseback riding served him well.

Karl's prowess as a horseman was an added bonus and a bit of serendipity when he was cast as Eomer, a warrior of the Rohan people (known as Horse-Lords) in the second and third installments of Peter Jackson's The Lord of the Rings trilogy. Eomer is the nephew of Rohan's King Theoden, and he helps to shape the future of Middle-Earth in The Lord of the Rings: The Return of the King.

Franchise films seem to agree with Karl. He played alongside Matt Damon in The Bourne Supremacy (2004), the follow-up to The Bourne Identity, and also with Vin Diesel in the Pitch Black sequel Chronicles of Riddick (2004).

He played Bones in the big screen version of Star Trek (2009) and reprised his role in two more installments of the series—Star Trek Into Darkness (2013) and Star Trek Beyond (2016).

He also took on the role of Judge Dredd for the 3D remake, Dredd (2012), a role played by none other than Sylvester Stallone in the original film and followed that up with the action flick Riddick (2013), in which he starred alongside Vin Diesel.

Next, he playing a supporting role alongside Antonio Banderas in the thriller Acts of Vengeance (2017).

In 2019, he played Billy Butcher on the Amazon Prime series The Boys, about a group of vigilantes out to get superheroes who abuse their power.

Karl Urban married Natalie Wihongi in September 2004. The couple had two sons, Hunter and Indiana, born in 2000 and 2005, before separating. In his spare time, Karl enjoys fishing, surfing, golfing and gardening.