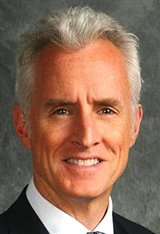 John Slattery was born in the Boston area and raised in Newton, Massachusetts, just a short drive from Boston. In 1984, he received a Bachelor of Fine Arts from The Catholic University of America, located in Washington, D.C.

Although he once dreamed of being a baseball player, John moved to New York City to pursue a career in acting. His first professional acting role came in 1988 when he was cast in a regular role as Leeds on the TV series The Dirty Dozen, starring Ben Murphy.

A number of guest appearances on TV series followed before he was cast in a recurring role on the TV series Homefront, from 1991 to 1993 for two seasons.

By 1998, he was playing Dr. Richard Meyers on the sitcom Maggie, starring Ann Cusack in the title role. Although the show lasted only one season, John soon found himself playing recurring guest roles on Law & Order (1998 to 2000) and Judging Amy (1999 to 2000). In 2001, he was cast as Dennis Martino on the quirky comedy drama series Ed, starring Tom Cavanagh in the title role. Although the show lasted four seasons, John only stayed for two, leaving to take on a role on the 2003 HBO TV series K Street, executive-produced by George Clooney and Steven Soderberg.

In 2004 he was cast in a regular role on the WB Network's drama series Jack & Bobby, staying with the show until it ended in 2005. In 2007 he took on two roles that would make him not only more familiar than he already was to TV audiences, but would cement his fame as a bonafide TV star. He made appearances as Victor Lang, the second husband of Eva Longoria's character on Desperate Housewives in 2007, but it was his role as Roger Sterling on Mad Men from 2007 to 2015 that earned him a great deal of critical acclaim.

He received four Primetime Emmy Award nominations in a row from 2008 to 2011 for his work on the show, and he shared nominations with the casts of both shows at the 2008 Screen Actors Guild Awards. The following year in 2009, the cast of Mad Men won, and they repeated the win in 2010. In 2011 he received a Gold Derby TV award as Best Supporting Actor in a Drama for Mad Men.

During his time on Mad Men, John made his directing debut, helming five episodes in total from 2010 to 2013. He made his film directorial debut in 2014 with God's Pocket, for which he also co-wrote the screenplay, based on the novel by Peter Dexter and starring Philip Seymour Hoffman. The film went on to receive a nomination in the drama category at the Sundance Film Festival. He has since directed three episodes of Judd Apatow's romantic comedy series Love for Netflix, in 2016 and 2017.

When the series concluded in 2015, he played Claude Dumet on the Netflix miniseries Wet Hot American Summer: First Day of Camp. Also in 2015, he played Boston Globe newspaper editor Ben Bradlee Jr. in the feature film Spotlight, which went on to win the 2016 Academy Award for Best Motion Picture. The cast of the film also picked up a Screen Actors Guild Award for Outstanding Performance by a Cast in a Motion Picture, as well as several other awards.

He has also wrapped production on two series for 2020: the FX original series Mrs. America starring alongside Rose Byrne, Elizabeth Banks and Cate Blanchett, and the sci-fi Fox drama series neXt, playing a former tech CEO who tries to stop a rogue articial intelligence from taking over the world.

John enjoys skiing and surfing in his spare time, as well as watching his favorite football team, the New England Patriots. He has been married to actress Talia Balsam since December 30 1998. They live in Manhattan and have one son, Harry.