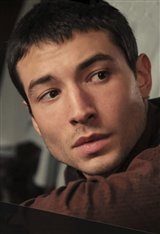 Born in New Jersey, Ezra Miller's artistic side has always been an important part of his life. At the age of six, he performed in the U.S. premiere of Philip Glass' contemporary opera White Raven, which earned him a grade school residency at New York's Metropolitan Opera.

As a child, he did not enjoy school and felt like he did not have a lot of friends. By age 16 however, Miller had decided that a traditional education was not meant for him and dropped out to pursue acting.

After landing a five episode arc on David Duchovny's Californication, Miller followed with a series of roles that some might call unconventional, to say the least.

In Afterschool, Miller played a web-porn addicted teen who chronicles the death of two classmates. In City Island, he is a lonely Bronx child with an unusual fetish. In 2011, two other dark roles may have pushed him to the forefront.

Another Happy Day is a black comedy-drama film written and directed by Sam Levinson, in which Miller plays Elliot, a drug addled teen and the child of self obsessed parents. For his portrayal, Ezra won a Breakthrough Performer award at the Hamptons International Film Festival.

In We Need to Talk About Kevin, Millers stars as Kevin alongside Tilda Swinton, who plays his mother, Eve. The film focuses on the relationship between mother and son and what may have caused Kevin to go on a killing spree just before his 16th birthday. To get into the mindset of the troubled teen, Miller prepared for months, trying not to speak to his mother to make sure he didn't infuse his own close relationship with his mother onto Kevin's strained one on Eve. It paid off when he was nominated for both a Broadcast Film Critics Association Award and a British Independent Film Award for his work in the film.

The talented young actor continues to work steadily in films such as Madame Bovary (2014), The Standford Prison Experiment (2015), Batman v Superman: Dawn of Justice (2016), Suicide Squad (2016), Fantastic Beasts and Where to Find Them (2016) and Justice League (2017). More recently, he reprised his role as Credence in Fantastic Beasts: The Crimes of Grindelwald (2018).

He also has an impressive music career. Miller is the drummer and vocalist for Sons of an Illustrious Father. They released their fourth album in 2016.