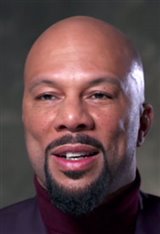 Born Lonnie Rashid Lynn, Common is a Chicago-born rapper whose album releases include "Can I Borrow a Dollar?" and "Resurrection," under the moniker Common Sense. In 1997 he simplified his name to Common following a lawsuit, and released several new albums, including "One Day It'll All Make Sense," "Like Water For Chocolate" and "Electric Circus."

In 2003, Common made his TV acting debut with a guest appearance on the UPN sitcom Girlfriends. He soon found his way onto the big screen, playing Sir Ivy in Smokin' Aces (2006) alongside Ben Affleck and Ryan Reynolds. Next up, he portrayed Turner Lucas in Ridley Scott's Golden Globe-nominated American Gangster (2007), starring Denzel Washington and Russell Crowe. Roles in Street Kings starring Keanu Reeves and Wanted starring Angelina Jolie were followed by a role in the blockbuster film Terminator Salvation (2009), starring Christian Bale. But the acting hasn't stopped there. Common has continued to land roles alongside big names, some of the more recent ones being Date Night (2010) with Steve Carell and Tina Fey, alongside the long list list of stars in the comedy New Year's Eve (2011) and with Jennifer Garner and Joel Edgerton in The Odd Life of Timothy Green (2012).

During this time he would also star in the AMC western series Hell on Wheels as Elam Ferguson for 32 episodes from 2011 to 2014.

He would appear in three films during 2013 including the sketch comedy film Movie 43, the crime thriller Now You See Me, and the crime mystery Pawn. Common would continue to work in the crime and drama genre in 2014 with films such as X/Y, Every Single Thing, and Selma, for which he won an Oscar alongside John Legend for Best Original Song.

In 2015 he starred in two more films, including the action thriller Run All Night and the drama Being Charlie, while also lending his voice as narrator for the documentary Unity. In 2016 he would star alongside Ice Cube, whom he feuded with during the late '90s, in the comedy Barbershop: The Next Cut while making a cameo in the DC Comics film Suicide Squad.

In 2017 he would have one of his busiest years yet as he starred opposite of Keanu Reeves in the action sequel John Wick: Chapter 2 after previously working together on the crime thriller Street Kings nearly a decade ago. He would follow that up with four other roles including Daniel Crawford in the dramedy A Happening of Monumental Proportions, Coltrane in the musical drama Love Beats Rhymes, Gunny Martin in the military drama Megan Leavey, and as himself in the comedy Girls Trip.

Common would also lend his voice talents to the Disney animated TV series The Lion Guard, in which he foiced the characters of Kibari and Kiburi for seven episodse from 2017 to 2019.

With that momentum in 2017 he would add another seven film roles to his resumé in 2018, including the dramas The Tale, Here and Now, All About Nina, Saint Judy, and The Hate U Give. His other two roles were in the action thriller Hunter Killer and a voice role in the animated film Smallfoot. Beyond the big screen he would also go on to appear in four episodes for the Chicago set drama series The Chi as Rafiq for four episodes from 2018 to 2019.

Though not as busy as 2018, Common’s 2019 slate featured another trio of projects, in films such as the crime dramas The Kitchen and The Informer.

In the action crime drama Ava (2020), he played the lead character's former fiancé, Michael, opposite Jessica Chastain. Unfortunately the movie, which also stars Colin Farrell and John Malkovich, went straight to Digital/VOD due to the COVID-19 pandemic.

Despite his transition to acting, Common has continued to produce music over the years. In total he has released 11 solo albums, with his most recent being Black America Again in 2016. He also formed a trio titled August Greene with Robert Glasper and Karriem Riggins.

A Chicago son to his core, Common is a big fan of the NBA’s Chicago Bulls and the NFL’s Chicago Bears. He was also once vegan, but is now a pescetarian. He is a supporter of animal rights and has appeared in print advertisements for PETA, as well as appeared in a documentary titled Holistic Wellness for the Hip-Hop Generation, in which he promoted vegetarianism.

He has also supported the “Knowing Is Beautiful” movement to support HIV/AIDS awareness. He was featured in the Yes We Can video during the presidential race for Barrack Obama in 2008. Common is also the founder of the Common Ground Foundation, a non-profit that seeks to empower underprivileged youth to be strong citizens and citizens of the world.

His activism has also extended to appearing alongside other rappers and activists in the award-winning documentary short #Bars4Justice, which was shot in Ferguson, Missouri and produced by Nation19 Magazine.

In 2018 he performed alongside Andra Day as part of the opening musical performance for the March for Our Lives anti-gun violence rally in Washington D.C. on March 24 of that year.

At one point Common was engaged to singer Erykah Badu, before calling it off. He is currently in a relationship with Angela Rye and has a daughter from an unmarried relationship.