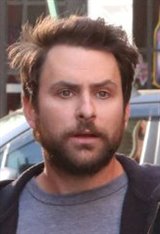 Born in the Bronx, New York, Charlie Day began his acting career on stage. He played four years at the Williamstown Theatre Festival and went on to play the lead role in Dead End at the Huntington Theatre in Boston. Charlie's comedic talent has garnered him a worldwide following among critics and fans alike as an actor, writer and producer. He made his TV acting debut in 2000 on ABC's Mary and Rhoda starring Mary Tyler Moore.

Charlie had a recurring role on NBC's Third Watch from 2001 to 2004 and also a lead role in the FOX comedy Luis (2003). Other early television credits include guest appearances on ABC's Madigan Men, Comedy Central's Reno 911! and NBC's Law & Order.

In addition to starring as Charlie Kelly on It's Always Sunny in Philadelphia since 2005, Charlie also serves as a writer and executive producer on the FX series, which he created in collaboration with friends Rob McElhenney and Glenn Howerton.

Charlie starred in the feature comedy Going the Distance alongside Drew Barrymore, Justin Long, Jason Sudeikis and Christina Applegate; and with Jason Bateman, Sudeikis, Jennifer Aniston and Colin Farrell in Horrible Bosses, as well as the sequel, Horrible Bosses 2 (2014). He lent his voice to Monsters University (2013) and acted alongside Idris Elba and Charlie Hunnam in Guillermo del Toro's sci-fi film Pacific Rim (2013), reprising his role as Dr. Newton Geiszler in Pacific Rim: Uprising (2018). Most recently, he played a role in Hotel Artemis (2018), alongside Jodie Foster, and lent his voice to the animated film The LEGO Movie 2: The Second Part (2019).