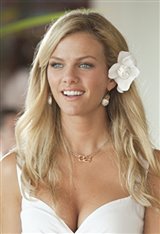 Brooklyn Danielle Decker was born in Ohio and raised in North Carolina. Her mother is a nurse, her father sells pacemakers and she has one younger brother. When Brooklyn was younger, she wanted to be a veterinarian and credits it to her parents' love of animals.

At 16, after having been discovered in a shopping mall, Brooklyn began her modeling career as the face of Mauri Simone, a popular prom dress maker. Her career took off as she posed for magazines such as Teen Vogue, Seventeen, Elle Girl, Vogue and Cosmopolitan. Her biggest break came after she moved to New York City and posed for the 2005 Sports Illustrated Swimsuit Edition. She continued to appear in the magazine from 2006 to 2011. She also graced the magazine's highly coveted cover page in 2010 and can be seen in Victoria's Secret swimsuit advertisements.

Switching over to acting, Brooklyn has guest-starred on television shows such as Chuck, Ugly Betty and Royal Pains. Her first TV movie lead role was alongside Ty Burrell in Lipshitz Saves the World. She also starred in the TV movie Cookies & Cocktails with John Legend.

In 2011, Brooklyn received a Teen Choice Award for Choice Movie Breakout: Female for her first big screen role as Adam Sandler's girlfriend in Just Go with It. In 2012, Decker appeared alongside Jennifer Lopez and Cameron Dias as Skyler, Dennis Quaid's pregnant wife in What to Expect When You're Expecting. She also secured a lead role as Sam in Battleship, starring Taylor Kitsch and Rihanna.

Decker splits her time between Los Angeles, where she plays the daughter of Jane Fonda and Martin Sheen on the popular Netflix series Grace and Frankie, and Austin, Texas, where she lives with her husband, Andy Roddick, whom she married in 2009. Their son, Hank, was born in 2015, and their daughter Steve was born in 2017.