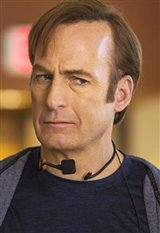 With only three credits left to graduate from Southern Illinois University, Bob Odenkirk left for Chicago, where he began to do stand up comedy and improv workshops. Back at school, he'd written comedy and been the host of a local college station's radio program, and in the process had met Second City director Del Close, who inspired him so much that he decided to leave school.

A friendship with Saturday Night Live writer Robert Smigel led to Odenkirk submitting sketches to the show, and eventually being hired on as a writer. He left the series in 1990 and ventured to Los Angeles, where he was hired for the sitcom Get a Life, starring Chris Elliot. Over the next few years, he wrote for The Dennis Miller Show, The Ben Stiller Show, Late Night with Conan O'Brien, and Tenacious D.

In 2000, Odenkirk made his directing debut with the unsold TV pilot The Near Future, which he also co-wrote. His film directing debut was Melvin Goes to Dinner (2003), based on Michael Blieden's play, but despite winning awards, including Best First Feature at several film festivals, it was never picked up by a major distributor.

His first major motion picture, Let's Go to Prison (2006) starring Dax Shepard and Will Arnett, was given a wide release by Universal Pictures, but the box office receipts were unimpressive.

Odenkirk's latest,The Brothers Solomon (2007) for Columbia Pictures, stars Will Arnett and Will Forte as two socially inept and unmarried brothers who want to fulfill their father's dying wish to have a grandchild.

As well, Odenkirk has worked in numerous projects as an actor, including on television on series such as Seinfeld, The Larry Sanders Show, 3rd Rock from the Sun, Everybody Loves Raymond and Joey, and in feature films such as Wayne's World 2 (1993), The Cable Guy (1996), Let's Go to Prison (2006) and the drama The Post (2017).

He also does voicework, including providing the voice of Winston Deavor in Incredibles 2 (2018).

His most recent role is the starring one in the thriller Nobody (2021), playing a family man who stays calm when his home is robbed, then discovers a long-simmering rage and decides to act upon it.

He and his wife, Naomi, have two children together.