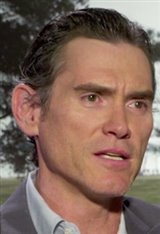 "I think I'm a good actor because I try really hard. That also means that when I suck, I aggressively suck. That probably happens as much as it doesn't, but at least I'm always in search of the moment where I can do something I haven't done before." - Billy Crudup

This native of New York was the middle child in a family of three boys. As a youngster he lived in Texas and Florida, finding roles in school pageants and developing funny impersonations to entertain family and friends.

After graduating with an undergraduate degree from the University of North Carolina, Billy went on to earn a Master of Fine Arts from the Tisch School of the Arts at New York University. From here he moved into the theater circuit.

He appeared on Broadway in the critically lauded Chekhov play Three Sisters with Amy Irving, Lili Taylor and Jeanne Tripplehorn, for which he received a Drama Desk nomination. In addition to his critically acclaimed performance opposite then-girlfriend Mary-Louise Parker in the Broadway play Bus Stop, Billy appeared in Tom Stoppard's Arcadia, which earned him the Outer Critics Circle Award for Outstanding Debut of an Actor; the Theatre World Award; and the Clarence Derwent Award.

Billy's first big-screen acting gig was in the indie film Grind (1997), which was shot in 1994, but ended up on the shelf for three years. In 1996 he landed another, more lucrative role opposite Hollywood hotshots Brad Pitt and Jason Patric in the Barry Levinson drama Sleepers (1996). For his role as a troubled survivor of childhood abuse, Billy received recognition that was amplified with his next role when he starred with Joaquin Phoenix in Inventing the Abbotts. That same year, he starred with Woody Harrelson in Stephen Frears' critically maligned The Hi-Lo Country (1998), for which he won Breakthough Performance - Male from the National Board of Review. He also won kudos for his performance as runner Steve Prefontaine in Without Limits (1998).

With such experience under his belt, it isn't a surprise that he ended the millennium off with four starring roles in Princess Mononoke (1999), Jesus' Son (1999), Waking the Dead (2000) and Almost Famous (2000). In Big Fish (2003), he played the son of a dying man (Albert Finney) who thrives on telling tall stories and tales. Later in the decade he landed the coveted role of Dr. Manhattan/Jon Osterman in the blockbuster movie Watchmen (2009).

Billy claims he doesn't want to be a star and often turns down roles because he makes millions of dollars each year as "voice over actor" for various products. But despite being picky, he's still taken on many mentionable roles in recent years, such as the part of J. Edgar Hoover in Public Enemies (2009), the ex-husband in the film adaptation of Elizabeth Gilbert's book Eat, Pray, Love (2010), a creepy neighbor in The Watch (2012), and a man who gets evicted from his parents' prestigious Manhattan hotel in The Longest Week (2014).

His performances are always stellar, but he was in particular a standout in the indie film 1 Mile to You (2017), playing a quirky but warm-hearted running coach.

Billy went on to bring some of that quirkiness to his character, Cory Ellison, on the 2019 Apple TV+ series The Morning Show. So far he was won two major awards for his performance, including a Primetime Emmy and a Critics Choice award from the Broadcast Film Critics Association. He has also won several awards for his role in Spotlight (2015), including a Screen Actors Guild Outstanding Cast award with the rest of the ensemble of the film, and Silver Bear in 2007 at the Berlin International Film Festival with the rest of the cast of The Good Shepard (2006). He is also a 2007 Tony Award winner for Best Featured Actor in a Play for his performance in The Coast of Utopia.

Never married, Billy dated Mary Louise Parker from 1996 to November 2003, but they split up during her seventh month of pregnancy. Their son, William Atticus, was born on January 7, 2004.