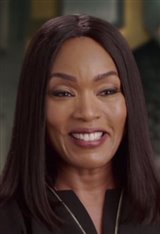 New York born but raised in Saint Petersburg, Florida, Angela Bassett and her sister were raised by her single mother in a housing project.

When she was in the eleventh grade, Bassett joined a group of students on a field trip to Washington D.C., where they attended a Kennedy Center production of Of Mice and Men starring James Earl Jones. Bassett was so moved by the play that she decided to become an actress and took on roles in church plays and school productions.

Pushed by a high school teacher, she applied for Yale and got a scholarship, ultimately spending seven years there including three post-grad years studying drama under the tutelage of Lloyd Richards. Richards cast her in Broadway productions of two August Wilson plays, Ma Rainey's Black Bottom and Joe Turner's Come and Gone.

When Bassett finally got into the movies, she found it difficult to avoid the stereotypical roles afforded to African-American women. (In one of her first higher-profile roles, a mini-series called Doubletake, she was cast as a hooker.) Despite the early set-backs, Bassett's talent always showed through, and she was able to rise above the often trite material.

In 1991, she took part in John Singleton's Boyz N the Hood, which launched the careers of many young black talents. Shortly thereafter, Bassett continued to build on her prestige with a role opposite Denzel Washington in Malcolm X and her Oscar-nominated/Golden Globe-winning performance as Tina Turner in What's Love Got To Do With It?. She has also won many Image awards, the most recent ones in 2003 for her roles in the feature film Sunshine State (2002) and the TV movie The Rosa Parks Story (2002). She starred in the mini-series American Horror Story: Coven (2014) and in the thriller White Bird in a Blizzard (2014). More recently, she played roles in London Has Fallen (2016), Black Panther (2018) and Mission: Impossible - Fallout (2018).

Bassett's resumé attests to her fearless and insatiable quest to tackle roles entrusted only to serious actresses. In fact, she is quite often compared to Meryl Streep, considered one of the most serious actresses around. She is one of the few African American talents to break this color boundary—a testimony to her fine acting abilities.