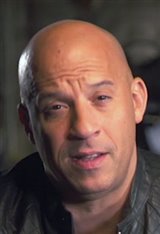 Vin Diesel was born and raised in New York where he honed his craft as an actor and writer. His father was a theater director, and Diesel was part of the cast of his father's repertory company, where he gained valuable experience playing a number of roles. He moved to Hollywood to break into films, but after a year without landing a job, he returned to New York. After his mother gave him a book that explained how to make your own movies, in 1995, Diesel wrote, directed, produced and acted in a short film called Multi-Facial (1999).

The film was shown at Cannes, but didn't really cause a stir, so he raised $50,000 and went on to make his first feature, Strays in 1997. Although it was accepted at the 1997 Sundance Film Festival, the film didn't do as well as he'd hoped. However, Steven Spielberg called him in 1997 on the basis of Diesel's work in his first time, and the young actor was subsequently offered a role in Saving Private Ryan, a true story about sacrifice and heroism in World War II, starring Tom Hanks.

He also played Baby Groot in Guardians of the Galaxy Vol. 2 (2017) and an adolescent Groot in Avengers: Infinity War (2018).

More recently, he starred in two action films: Bloodshot (2020), based on the bestselling comic book, and F9: The Fast Saga (2021), where he reprised his role as Dom Toretto.