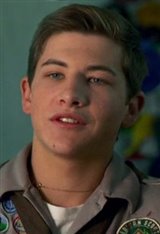 Tye Kayle Sheridan had only acted in a handful of school plays before he was chosen out of a field of 10,000 boys to play the youngest son of Jessica Chastain and Brad Pitt in Terrence Malick’s The Tree of Life. His performance in the critically-acclaimed film won him a spot in indieWIRE’s "Top twenty-five Filmmaker and Actors" of 2011.

Tye next co-starred opposite Matthew McConaughey in Mud, playing a young teen named Ellis who helps a convict escape the law. His third feature was playing the role of Gary Jones, the eldest child in a homeless family headed by an alcoholic father in Joe. He and an ex-con (Nicolas Cage) become close as they try to find a better life in the hard world of small-town Mississippi.

Tye's career has really taken off since then. In 2016, he joined the X-Men universe in the role of Scott Summers/Cyclops in X-Men: Apocalypse (2016), reprising it in Dark Phoenix (2019). In 2018, he played the starring role of Wade Watts in the Warner Bros. feature film Ready Player One (2018).