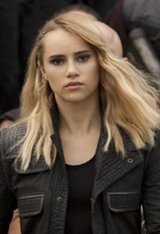 The daughter of a nurse and a plastic surgeon, Suki Waterhouse was born in London, England. Although she had no plans of getting into the entertainment business, she was discovered in a pub when she was 16 and began modeling. By 19, she'd worked her way up to being a lingerie model for Marks and Spencer. She also went on to model for Tommy Hilfiger, H&M, Swatch and in 2014 became the face of Burberry's Brit Rhythm fragrance. In 2015, she was the face of Redken's Diamond Oil.

In April 2013, her career had a big boost when she began a highly publicized romance with A-lister Bradley Cooper that lasted two years. Although she'd done a small amount of acting in minor roles/productions, in 2014 she landed a supporting role in the Liongate feature Love Rosie (2015), starring Lily Collins and Sam Claflin.

Another suporting role followed in The Divergent Series: Insurgent (2015), and the following year, she had a leading role in Pride and Prejudice and Zombies (2016).

In the indie film The Bad Batch (2017), Suki played her first starring role as Arlen, a young woman who runs into trouble in post-apocalyptic America, starring alongside Keanu Reeves.

In September 2016, Suki launched an accesories line with her best friend Poppy Jamie, called Pop & Suki. The line is aimed at Millennials and has a number of celebrities who have been seen wearing it, including Suki's friend, fellow model/actor Cara Delevigne.

Most recently, Suki returned to the big screen in the thriller Assasination Nation (2018) alongside Odessa Young.

In her spare time, Suki enjoys photography and has had her work shown at a London gallery. Her younger sister, Imogen Waterhouse, has followed in Suki's footsteps - she's also a model/actor.