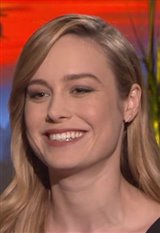 Sacramento native Brie Larson first came into the public eye by appearing on The Tonight Show with Jay Leno where she performed various skits.

While developing her career as an actress, Brie was also working on her music career. Releasing her first album, Finally Out of P.E., in 2005 she travelled around the United States with several artists such as Jesse McCartney. She also got the opportunity to combine her passion for both acting and singing when she performed with the Canadian indie rock band Metric in the widely successful comedy film Scott Pilgrim vs. the World (2010).

Brie's most notable career development came through the popular drama series United States of Tara (2009), playing Toni Collette's sarcastic daughter. This role gained her a significant amount of attention and praise. She is now a rising feature film actress, appearing in the action comedy 21 Jump Street (2012) with Channing Tatum and Jonah Hill. She starred in Don Jon(2013) alongside Joseph Gordon-Levitt and Scarlett Johansson. She starred in The Gambler (2014) and more recently, she starred in Room (2015). For her work in the latter movie, she received numerous nominations, including nominations from the Academy Awards, BAFTA Awards and the SAG Awards. She also won a 2016 Golden Globe Award and an Academy Award for Best Performance by an Actress in a Motion Picture - Drama.