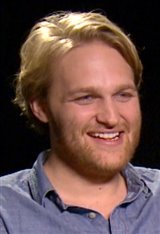 Wyatt Russell is the actor and former pro-hockey player son of actors Kurt Russell and Goldie Hawn. Born in Los Angeles, Wyatt began acting at a young age, naturally, alongside his father. He first appeared on screen in a small role as an orphan boy in John Carpenter's Escape From L.A.. He starred in another one of his father's films in 1998, playing his father's character at a younger age in the film Soldier.

But Wyatt showed interest and talent in other things, namely, hockey. In an interview with NHL.com, Wyatt remembers the first time his father brought him to a rink, thus beginning his interest in the sport: "It actually is my first vivid memory. The feeling of that glide, I loved it. My dad went up to the ticket counter and asked how much to buy skates. I went home and he put me in a league when I was 4. It was the only thing I wanted to do." Wyatt became a skilled hockey player and played for junior teams both in the U.S. as well as in Canada. He eventually went on to play professionally for a team in Germany. Unfortunately, persistent hip injuries resulted in Wyatt having to quit the game for good in 2010. It was at this point that he decided to pursue a career in acting full time.

With his focus now on the family business, Wyatt earned roles in big box-office films such as 2011's Cowboys and Aliens and in Judd Apatow's 2012 comedy This Is 40. But for Wyatt, it wasn't as easy a transition as one would expect from someone who's grown up in a family of actors — in addition to his parents, his half-sister, Kate Hudson, is also an actress. Wyatt felt his interest grow for the industry and the craft as he continued to work in it and build a resumé. In an interview with E! News, Wyatt says, "I learned to love it... I fell in love with it after I began."

And the roles just keep coming for this young, talented actor. Roles in top-grossing films such as the buddy cop comedy sequel 22 Jump Street, for which Wyatt earned a Teen Choice Award nomination for Choice Breakout Star, show that this young man is on the right path. Even Wyatt's background in hockey has helped support his budding acting career as his skills on the ice made him the perfect candidate to take on the role of the on-ice adversary for Seann William Scott's character Doug Glatt in 2017's Goon: Last of the Enforcers. Wyatt can also be seen opposite Anna Kendrick in the 2017 comedy Table 19. He also plays a role in Blaze (2018), a biopic about musician Blaze Foley, which is directed by and also stars veteran actor Ethan Hawke.

Speaking of musicians, Wyatt is also a skilled musician who has played in films, including in 2013's Love and Honor and Richard Linklater's film Everybody Wants Some!! (2016).

Wyatt is also making a name for himself on the small screen. With guest appearances on TV shows such as Black Mirror, Arrested Development, Law & Order: L.A. and the lead role in the upcoming AMC drama series Lodge 49, Wyatt is certainly an actor to watch.

Wyatt married Dutch stylist Sanne Hamers in 2010 after meeting her at a salsa bar in Holland. They were divorced in 2017. Since 2016, Wyatt has been in a relationship with actress Meredith Hagner. The two share a home in Sherman Oaks, California.