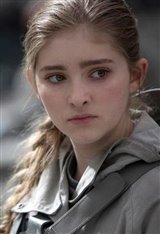 In 2008, Willow landed her first acting job doing voiceover work in the short film Las Vegas New Mexico 1875. Her part was small, in which she voiced a girl watching a gunfight. That same year, she made a guest appearance on the USA series In Plain Sight. Willow’s first TV movie was in 2011, in the Hallmark Hall of Fame movie Beyond the Blackboard, starring alongside Canadian Emily VanCamp.

Willow’s big break happened in 2011, when she was cast as Primrose Everdeen in the much-anticipated film adaptation of Suzanne Collins’ science fiction novel The Hunger Games. Directed by Gary Ross, the film starred Jennifer Lawrence, Liam Hemsworth and Elizabeth Banks and was released in 2012. Willow then went on to star in an episode of R.L. Stine’s The Haunting Hour that same year.

In 2015, at age 14, she became the youngest competitor of the popular TV series Dancing with the Stars. Although she earned high scores throughout the season, she was voted off in the seventh episode.

She has also played starring roles in the movies Into the Rainbow (2017), Woodstock or Bust (2019), and in the upcoming film, A Fall From Grace, alongside Vincent D'Onofrio.

Willow is passionate about different forms of art, including photography. She likes
to read, practice yoga and play guitar when her schedule permits.