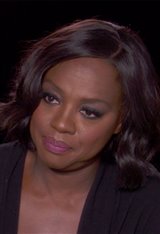 A graduate of Juilliard, Viola Davis built an exceptional background in theater productions and has continued to perform on-stage throughout her television and film career.

Making her feature film debut in 1996 as a nurse in The Substance of Fire, Viola followed that up with several TV movies and guest-star appearances on dramatic series like Law & Order and NYPD Blue. She went on to play another nurse in City of Angels, a hospital drama with a predominately African-American cast that didn't last long on CBS. She began collaborating with Steven Soderbergh for Out of Sight, and went on to star in two of the director's next few films, Traffic and Solaris.

In 2001, she appeared in Kate and Leopold and in Oprah Winfrey's television presentation of Amy & Isabelle. The next year Viola played parts in both Far From Heaven (2002) and Denzel Washington's directorial debut, Antwone Fisher (2002).

In 2009 Viola received her first Academy Award nomination for her exceptional performance in Doubt (2008). Since then she's appeared in a number of major motion pictures, including Law Abiding Citizen (2009) with Denzel Washington and Russell Crowe, Knight and Day (2010) with Tom Cruise and Cameron Diaz, Eat Pray Love (2010) with Julia Roberts and Won't Back Down (2012) with Maggie Gyllenhaal.

In 2012, she received her second Academy Award nomination and a second Golden Globe nomination, this time for her leading role as Aibileen Clark in The Help. She followed this up with roles in Prisoners (2013) alongside Hugh Jackman and Jake Gyllenhaal, Ender's Game (2013), Get On Up (2014), and Lila & Eve (2015).

Viola was then seen starring in the hit ABC series How to Get Away with Murder. On the big screen, she continued to work steadily, with starring roles in the action flick Suicide Squad (2016) and the drama Fences (2016).

For her role in the latter, she received numerous awards, including an Academy Award, BAFTA Award, SAG Award and a Golden Globe.

In 2020, she starred in the Netflix film Ma Rainey's Black Bottom, which earned her several award nominations for Best Actress, including nods from the Oscars, Golden Globes and Screen Actors Guild awards.