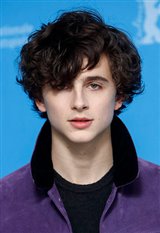 Born and raised in New York City, Timothée Chalamet is the grandson of screenwriter Harold Flender.

As a student of LaGuardia High School of Music & Art and Performing Arts, Timothée began his professional acting career at an early age, appearing in commercials and in plays.

After making his screen debut in short films, Timothée made his TV debut in 2009 with a guest appearance on an episode of Law & Order and in a TV movie titled Loving Leah.

In 2012 he played recurring roles on two TV series: Royal Pains and Homeland.

Timothée made his film debut in 2014, playing a high school student alongside Ansel Elgort, a friend and classmate from LaGuardia High School, in Jason Reitman's Men, Women & Children (2014). Timothée then played the son of Matthew McConaughey's character in Interstellar (2014).

More roles followed, mostly in lesser-known indie films, but in 2017, Timothée gained attention when he appeared in a number of critically acclaimed films. He played a supporting role as a high school student opposite Saoirse Ronan in Lady Bird, a young soldier opposite Chrisian Bale in the western Hostiles and a starring role as an Italian teenager who struggles with his sexual orientation as he falls for his father's older assistant (played by Armie Hammer) in the film festival favorite Call Me by Your Name. For his role in the latter film, Timothée earned Best Actor nominations from the Academy Awards, the Golden Globes, the SAG Awards and the BAFTAs. He also won awards from numerous Critics associations.

Timothée has filmed a starring role in Woody Allen's A Rainy Day in New York (2018) alongside Jude Law, Selena Gomez and Elle Fanning, but since learning about the sexual abuse claims against Allen, he announced he's donating his entire salary from the film to three different charities: Times's Up, The LGBT Center in New York and RAINN, an anti-sexual violence organization.

Most recently, he returned to theaters in the drama Beautiful Boy (2018), in which he starred opposite Steve Carell. He also appears as Theodore "Laurie" Laurence in the upcoming film Little Women (2019), alongside Emma Watson and Saoirse Ronan.

At age 13, Timothée, who has a French father, landed his first summer job as a soccer coach in a tiny town in the north of France.

Timothée, who still lives in NYC, has a pet turtle named Urdle.