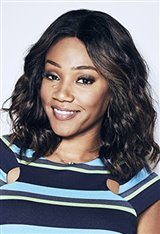 When Tiffany Haddish was three, her father, an immigrant from the East African country of Eritrea, left the family. Tiffany's mother remarried, but suffered a traumatic brain injury a few years later in a car accident that resulted from her husband tampering with the brakes, in an attempt to kill not only her, but her four children, for insurance money.

Tiffany and her siblings weren't in the car because at the last minute, Tiffany asked her mother if she could stay at home and babysit the younger children. In a rush, her mother agreed. The injury changed her mother's personality from a loving mother to an abusive one. By the time Tiffany was 13, she and her four half-siblings were put into foster care. She lived in three different foster homes before her grandmother was able to gain custody.

In her mid-teens, Tiffany was enrolled by a social worker in the Laugh Factory Comedy Camp for underprivileged children, where she was mentored by comedy veterans Richard Pryor and Dane Cook. She went on to perform as a teenager at the Laugh Factory in exchange for bus fare. She made better money working as a host at bar mitzvahs, where she would entertain the guests and get them laughing and dancing with her high spirits.

When she turned 18, Tiffany's grandmother told her to leave her home, because she was no longer being paid by Child Services to keep her. Tiffany lived out of her car for a time and worked in customer service for Alaska Airlines before she began landing acting gigs in her mid-twenties, including a guest appearance on the Disney series That's So Raven in 2005. The same year, she played a role in the independent film The Urban Demographic (2005).

Other film credits include a bit part in the feature film Meet the Spartans (2008) and guest appearances on shows such as It's Always Sunny in Philadelphia, My Name is Earl and New Girl. Her first recurring role was on Kevin Hart’s BET show Real Husbands of Hollywood from 2013 to 2014, following by another recurring role on Tyler Perry’s OWN soap opera, If Loving You Is Wrong from 2014 to 2015. She then played Nekeisha on the NBC comedy series The Carmichael Show from 2015 to 2017.

However, she's best known for the role that rocketed her to fame, when she starred as Dina in the hit feature comedy film Girls Trip (2017), alongside Regina Hall, Queen Latifah and Jada Pinkett Smith. She landed the role only after learning about the script through the grapevine from crew members she'd worked with on the movie Keanu (2016), opposite Keegan-Michael Key and Jordan Peele. Although the producers were looking for a more famous actress to play the role, Tiffany quickly convinced them of her talent and went on to steal the movie from her experienced co-stars.

Tiffany reconnected with her father, Tsihaye Reda Haddish, in her twenties and he walked her down the aisle at her wedding to William Stewart, a private detective. However, Tsihaye died in 2017 from a combination of heart failure and pneumonia. Tiffany divorced Stewart, remarried him, then divorced him for a second time in 2013.

Tiffany's memoir, titled The Last Black Unicorn, was released in December 2017 by Simon & Schuster and debuted at number 15 on the New York Times bestseller list. She starred in a 2017 Showtime special, Tiffany Haddish: She Ready! From the Hood to Hollywood! and currently plays Shay on the Turner Entertainment Network's comedy series The Last O.G., opposite Tracy Morgan.