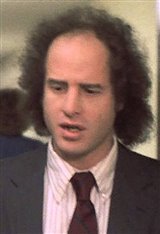 Born in New York City, Steven Wright grew up in Boston. As a teenager, he enjoyed staying up late to watch The Tonight Show starring Johnny Carson, especially when comedians were featured. He decided he wanted to be a comedian too, but was afraid to admit it out loud. Instead, he attended Boston's Emerson College, graduating with a degree in mass communications.

He decided to finally give comedy a try at the age of 23, when he attended an open mike night at a Boston comedy club. His dry humor, delivered with a poker face in a monotone, was a hit. When he was invited to appear on The Tonight Show in 1982, he knew his dream had come true. Wright was so well received that he was asked to come back the following week, and soon found himself making appearances on other comedy/late night talk shows such as Saturday Night Live and Late Night with David Letterman. His debut album, I Have a Pony, was nominated for a Grammy in 1986.

Also in 1986, he made his motion picture debut in Desperately Seeking Susan, starring Madonna. The following year he appeared in a short film he wrote with Roberto Benigni and Jim Jarmusch, entitled Coffee and Cigarettes. Jarmusch went on to create two other shorts in the same vein and eventually decided to incorporate them into a feature length film by the same title, which was released in 2004. Wright was awarded an Oscar in 1989 for Best Live Action Short Film for The Appointments of Dennis Jennings, which he co-wrote with Michael Armstrong and starred in as the title role.

From 1992 to 1994, Wright played Warren Harharman on the hit sitcom Mad About You, starring Helen Hunt and Paul Reiser. He also continued to appear in feature films such as Natural Born Killers (1994) starring Woody Harrelson and Juliette Lewis; Canadian Bacon (1995) starring John Candy and Alan Alda; The Muse (1999) starring Sharon Stone and Albert Brooks; and Loser (2000), starring Jason Biggs and Mena Suvari. His latest film is 2017's The Emoji Movie.

Multi-talented, Wright also plays guitar and writes songs, is a talented painter, has written two short films and has had a fiction story published in Rolling Stone Magazine.

After years of living in New York and Los Angeles, Wright moved back to Boston in 2002. A Red Sox fan, he enjoys attending baseball games in his spare time. He continues to perform stand up comedy, and recently completed a tour that included Las Vegas and several other American cities as well as England and Ireland.