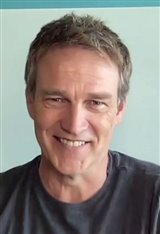 Notably known for playing sexy vampire Bill Compton in HBO's True Blood, British hunk Stephen Moyer (birth name Stephen John Emery), was born in Essex, England. His acting career began as a child, performing in numerous productions in local theaters in Brentwood and Chelmsford, Essex. Moyer made a name for himself after he created his own theater company, "The Reject Society."

The ambitious actor then studied at the London Academy of Music and Dramatic Art, where he began his training as a professional actor. After graduating from LAMDA, Moyer began his professional acting career on stage, starring in productions such as Romeo & Juliet, The Thebans and The Iron Man, touring with companies like the National Theatre of Wales, the Royal Shakespeare Company and the Oxford Stage Company.

After five years of working on the stage, Moyer made the transition to the small screen, where his television credits include leading roles in The Grand (1997), Men Only (2001) and Empathy (2007). In the meantime, Moyer made his big screen debut playing the title role in Prince Valiant (1997), which also starred Katherine Heigl, followed by Quills with Geoffrey Rush and Michael Caine in 2000. His U.S. television credits include leading roles in Princess of Thieves (2001) with Keira Knightley, the NBC mini-series Uprising (2001), the Golden Globe and Emmy nominated television show The Starter Wife (2007), and True Blood (2008-2014).

During hiatus from True Blood, Moyer had time to play a starring role in the horror/sci-fi thriller Priest (2011) alongside Paul Bettany and Christopher Plummer. He also appeared in the sports drama film Concussion (2015), opposite Will Smith, and in the 2016 thriller Detour. Most recently, Moyer appeared in the series The Gifted (2017-2019), and he directed two episodes of the British dramedy Flack (2020).

In August 2010, Moyer married his True Blood costar, Canadian actress Anna Paquin. He has two children from previous relationships. Currently, Moyer splits his time between his homes in London and Los Angeles.