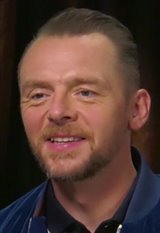 Simon Pegg was a highly successful standup comedian before breaking into film and TV. Born in Gloucester, England, he graduated in 1991 from Bristol university with a BA in Theatre, Film and Television. By 1995, he was a regular on the sketch comedy series Six Pairs of Pants. He continued to work on various comedy series up until 1999, when Spaced, a sitcom he co-wrote and co-starred in with fellow comedian Jessica Stevenson, aired. Shown on Channel 4, the series was a runaway hit and led to a second season being commissioned. Critics and viewers alike loved the show, and it received a bevy of nominations at the British Comedy Awards including Best Sitcom and Best TV Newcomer for Simon, Best Sitcom at both the UK and International BAFTAs and an International Emmy Award nomination.

He teamed up with Edgar Wright to co-write the screenplay for the romantic zombie comedy film Shaun of the Dead (2004), with Wright directing and Pegg playing Shaun. For his work on the movie, he's won the Peter Sellers Award for Comedy from the Evening Standard British Film Awards; a British Independent Film Award for Best Screenplay; and a Bram Stoker Award for Screenplay.

In 2016, Pegg reprised his role as Scotty in Star Trek Beyond, starred in the thriller Terminal (2016) and provided several voices for the animated sequel Ice Age: Collision Course (2016).

He continues to work steadily, reprising his role as Benji Dunn in Mission: Impossible - Fallout (2018) and playing Ogden Morrow in Ready Player One (2018).

On July 23, 2005, he married Maureen McCann. In July 2009, Maureen gave birth to a girl whose godfather is Coldplay's Chris Martin. Simon is godfather to Apple, Martin and Gwyneth Paltrow's daughter.