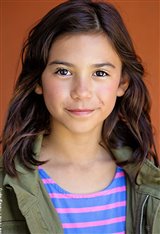 Scarlett Estevez was born in Los Angeles to parents Samantha Weil Estevez and real estate dealer Anthony Estevez. Her aunt is Liza Weil, who played Paris on Gilmore Girls, and Bonnie on How to Get Away With Murder.

Her first film role came in the Make-a-Film Foundation short The Magic Bracelet, starring alongside some big names in the business, including James Van Der Beek, Hailee Steinfeld, Jackson Rathbone, and J.K. Simmons.

Scarlett made her film debut in the 2013 film And Then There Was You, but is better known for playing Megan, the daughter of Mark Wahlberg's character in the two hit comedies Daddy's Home (2015) and Daddy's Home 2 (2017).

She also appears on the Netflix original series Lucifer, which is currently in its fourth season, as Trixie, the daughter of detectives Chloe Dekker (Lauren German) and Dan Espinoza (Kevin Alejandro).

A dream of hers was to provide a voice for an animated feature, which came true when she was cast as the voice of Izzy in Dr. Seuss' The Grinch, the latest animated adaptation of the classic Dr. Seuss story, How the Grinch Stole Christmas.

When the cameras aren't rolling for Lucifer, Scarlett likes to be just a kid on set biking around or taking dancing lessons from fellow castmate Aimee Garcia.

With a long career still ahead for her, Scarlett has aspirations to do an action film one day, play a superhero who can shape-shift and hopefully be a director like some of her inspirations such as Tara Weyr (Lucifer) and Sean Anders (Daddy's Home).