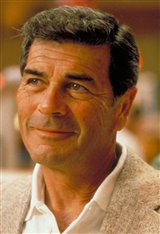 "I can't tell you what happened after that," Forster said. "You get lost in the shuffle. I have no idea what happened. There are this many actors and this many parts. You slip into one B-picture and then all you're doing is B-pictures. And then you don't even get those anymore. The next thing you know is you're in a downward slide that continued for 25 years."

A native of Rochester, NY, Forster began his acting career in local community theater, moving to New York City in 1965, where he made his professional debut in the two-character Broadway production of Mrs. Dally Has A Lover. His other stage credits include A Streetcar Named Desire, The Glass Menagerie, and the off-Broadway productions of Twelve Angry Men, The Sea Horse, and One Flew Over the Cuckoo's Nest.

Over the years, he appeared in several small films, including stand-out performances in The Don is Dead, Stunts, Avalanche, Alligator, and Delta Force. As for television, Forster starred in three series: Banyon, Nakia, and Once A Hero. He appeared in several telefilms including Death Squad, Standing Tall, The Clone, and an Emmy Award winning episode of Police Story.

To support himself, he played mostly killers in B movies, doing anything that was offered to him. There were also the years when the only money Forster received was from unemployment. Sometimes he made as little as $1000 to act in films that were shot in five days. Things got so bad, a Spanish actor made three pictures using Forster's name and no one knew the difference (note: the real Robert Forster did not appear in Orgy of the Nymphomaniacs). "I realized in the middle of the 25 year slide I might make it in the late innings, but you should never quit," he says.

Forster gave his all in obscurities like Esmerelda Bay and Maniac Cop III. He kept busy during down times by operating an actor's workshop and even developed a three step program to endure his disappointments, giving motivational speeches about dealing with setbacks.

His luck changed in 1997 when up and coming director Quentin Tarantino cast him in Jackie Brown. Tarantino had remembered Forster from some of his films in the 60's. "I always hoped that some kid who liked me when he was young was going to turn into a filmmaker and hire me," said Forster. "And that's what I kept saying to myself: Pray for that kid." He must've prayed hard. As Max Cherry, a soulful bail bondsman in love with an outlaw played by Pam Grier, Forster earned an Oscar nod for the role and re-emerged in Hollywood at the age of 56.

"I'm not sure how a guy wins or loses in this business, but somebody's got to come along and make you lucky," Forster said. "You can't do it yourself."