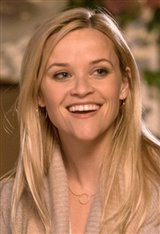 Nashville, Tennessee born Reese Witherspoon made a splash in her big screen debut, 1991's The Man in the Moon. Only 14 at the time, Reese played the role of Dani Trant in the coming-of-age drama, which won rave reviews from critics. Witherspoon followed up this tremendous start with a Disney feature, A Far off Place and Jack the Bear, two family oriented movies which served to broaden her appeal to a wider audience.

Reese soon made choices that moved her image away from the Disney scene, appearing in a string of Gen-X targeted movies, which were replete with angst and sexual overtones. First came a small role in S.F.W., a dark, satirical look at celebrity in which she played a prom queen held hostage along with a raving nobody. Then came Fear, a showcase of the dark side of teen love with Mark Wahlberg.

In 1998, Reese appeared with screen legend Paul Newman in Twilight, followed by Pleasantville, opposite Tobey Maguire. A return to teen fare followed in 1999 with Cruel Intentions. Starring alongside other teen favorites of the moment Joshua Jackson, Sarah Michelle Gellar and Ryan Phillippe, the film was a modern day adaptation of Dangerous Liaisons. She also appeared opposite Matthew Broderick in the satire Election, an MTV production about Tracy Flick, a manipulative young woman determined to become school president. Witherspoon earned a Golden Globe nomination for her performance.

She received her second Golden Globe nomination for her hit film Legally Blonde (2001). The success of the film propelled Witherspoon into becoming one of Hollywood's top female stars, and her next film, Sweet Home Alabama (2000) was number one at the box office for several weeks, earning over US $125 million at the domestic box office. For the sequel, Legally Blonde 2: Red, White & Blonde (2003), Reese earned $15 million, a big jump from the $1 million she earned for the first Legally Blonde film.

Her career climbed new heights when she went from being not only an incredibly bankable actress to being an Academy Award winner, receiving the 2006 statuette for her performance as June Carter Cash in Walk the Line (2005). For the same role, she also received a 2006 Golden Globe and won awards from the National Society of Film Critics, the New York Film Critics Circle, The San Francisco Film Critics Circle and the Satellite Awards.

She also appeared in The Good Lie (2014) and Inherent Vice (2014), as well as Wild (2014), for which she received her second Academy Award nomination and her fourth Golden Globe nomination.

She went on to star in the comedy Hot Pursuit (2015) with Sofía Vergara, and lent her voice to the animated film Sing (2016) with Matthew McConaughey and Scarlett Johansson. In 2017, she starred in the romantic comedy Home Again and the HBO series Big Little Lies, which she also executive-produced. For her performance on the show, she received her fifth Golden Globe nomination, her first Emmy award nod, and won a Grace Allen award. In 2018 Reese starred as Mrs. Whatsit in the film adaptation of Madeleine L'Engle's classic novel A Wrinkle in Time, opposite Oprah Winfrey.

In 2019, Reese executive-produced and starred in Apple TV+'s hit series, The Morning Show, which co-starred Jennifer Aniston and Steve Carell. For her performance as Bradley Jackson on the show, Reese earned a 2020 Golden Globe nomination.

Reese, a vegetarian, married actor Ryan Phillippe in 1999 and they have a daughter, Ava Elizabeth and a son, Deacon. Unfortunately, their marriage fell apart in October 2006 when it became clear to Reese that Ryan had cheated on her. Reese was named one of the 50 Most Beautiful People by People Magazine in 2002, and in 2003, she was voted Most Popular Actress by Entertainment Weekly readers.