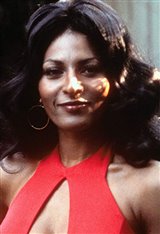 Born in Winston-Salem, North Carolina, the part Black, Asian, White, and Native American Pam Grier entered the Metropolitan State College in Denver at the age of 18. Catching the eye of Hollywood agent Dave Baumgarten during a beauty pageant, he invited Pam to accompany him to Hollywood because of the demand for black performers. She declined at first, but at the urging of her mother, finally agreed.

Baumgarten became her agent, sent her to acting classes, and employed her as a switchboard operator with his agency. At readings she was told she was not "Negro enough," that the space between her two front teeth might register too distracting on film, that she was overweight or too thin. After these dismal auditions, Pam got a job at AIP (American International Pictures) as a switchboard operator.

After playing an extra in Beyond The Valley Of The Dolls, Pam landed a role in The Big Doll House. She then starred in the film's two sequels, The Big Bird Cage and Women In Cages. Those successful women-in-prison films paved the way for her roles in Twilight People, Hit Man, and Cool Breeze.

It was not until Pam portrayed Lee in Black Mama, White Mama, that Hollywood began to take notice of her as an actress of impressive skill. The film led Pam to be cast as Mamawi in the low-budget, but lavish The Arena.

Pam's explosive performance as Coffy in the 1973 film of the same name catapulted her into stardom. Following its enormous success, AIP ushered out more films starring Grier as voluptuous vigilantes Foxy Brown (1974), Sheba Shayne in Sheba, Baby (1975), and Friday Foster (1975). ­All were huge successes, but Pam soon grew tired of the one-dimensional role of an ass-kickin" black sex goddess. After Friday Foster, which fulfilled her contract with AIP, she abandoned the studio.

Unfortunately, after leaving the crude American International Pictures, Pam received only supporting roles, such as the wife of Richard Pryor in Greased Lightning, and a role in the banal Mandingo sequel, Drum. In 1981, Pam gave one of the most chilling performances ever as the giggly homicidal prostitute, Charlotte, in the Paul Newman police drama Fort Apache, The Bronx. More small, but memorable performances in films such as Something Wicked This Way Comes and Above The Law followed. Dissatisfied with her film career, Pam turned to the theater to develop her acting skills.

At the start of the '90s, Pam was ready to utilize her refined acting skills. She gave a stirring performance in the hit Original Gangstas, was a lethal and sly transsexual in John Carpenter's Escape From LA, and a divorced mother in the quirky sci-fi comedy Mars Attacks! Pam also starred in Fakin' Da Funk, Woo, and Jackie Brown. The latter, based on the Elmore Leonard's novel Rum Punch, was adapted by Quentin Tarantino, who wrote it with Pam in mind to play the title character.

Even if the unique, alluring beauty and remarkable talent of Pam Grier is utilized and appreciated in more films now than ever, Pam still reflects on the importance of her earlier films. "People weren't used to seeing a female lead in an action movie, and I think a lot of them related to the independence my characters showed... It's really an honor to know that new audiences are discovering my old movies," she affirms.

She currently plays the role of Constance on the ABC sitcom Bless This Mess (2019) alongside Dax Shepard and Lake Bell, and this year co-starred with Diane Keaton and Jacki Weaver in the big screen comedy Poms (2019).

Pam lives on a ranch near Denver.