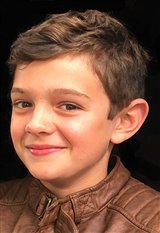 Noah grew up in the U.K., and before landing his first role at 10 years old with a guest role on the British series Penny Dreadful in 2015, Noah attended Cheadle Hulme school in Cheadle, Cheshire (near Manchester), where he was a member of the relay swimming team. Noah also plays field hockey for Alderly Edge hockey club when he isn’t busy filming.

He quickly started landing more TV parts, appearing in season six of Downton Abbey and in the mini-series Houdini and Doyle (playing the role of Kingsley Conan Doyle), in addition to the award-winning mini-series The Night Manager with Tom Hiddleston and Hugh Laurie.

On the big screen, Noah played Nicky, the son of Matt Damon's character, in the George Clooney-directed Suburbicon(2017). During a press conference at the Toronto International Film Festival, Clooney said of Noah, “The kid [Noah Jupe] was hard to find. He’s British, believe it or not, and we budgeted more time for him, but he did everything in one take. It was really humiliating to watch as an actor, him nailing it every time. [laughs] I played a pediatrician on ER for years so I worked with a lot of child actors you know, and 99 percent of them shouldn’t be there, it’s really more about the parents. But this kid is just dead center great and easy, and he had to do a lot of really weird emotional stuff, like Matt Damon telling him he’s gonna kill him.”

Noah also plays a supporting role in Wonder (2017) as the lead character Auggie’s best friend, Jack Will. He also played a role in the short film My Pretty Pony (2017) an adaption of a Stephen King short story of the same name, in which he appeared alongside Tobin Bell of the Saw franchise.

Noah had three projects in 2018. He played Lucas Janssen in The Titan with Sam Worthington, Marcus in Paramount Pictures' A Quiet Place (starring Emily Blunt and directed by/starring John Krasinski) and Doxy in Holmes and Watson (2018) alongside Will Ferrell, John C. Reilly and Ralph Fiennes for 20th Century Fox.
Noah reprised his role as Marcus Abbott in A Quiet Place Part II in 2021.