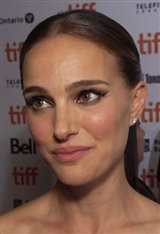 Natalie Portman's story about how she started her film career sounds like the old hanging-out-in-Schwab's-drugstore-in-Hollywood-waiting-to-be-discovered cliché. "Oh, the pizza parlor story," she says, recalling the 1992 encounter that changed her life. "I was in a pizza parlor after dance class one day when I was 11 and a man from Revlon saw me and wanted me to model and I said I wanted to act, so he introduced me to an acting agent and I started going out on auditions and that was it."

Well, that's not quite it. Fact is, her first role as the Lolita-ish character who befriends hitman Jean Reno in The Professional was a tour-de-force performance from the then 13-year-old girl. So convincing was she that director Adrian Lynn tried to cast her in his remake of Lolita, a role she turned down because, she says, "I don't know if I'll ever be able to do nudity in film, and certainly not when I'm 14."

Born in Jerusalem, Israel, as a teen Portman said her film career was limited by one thing at the time: "My father has a general rule. He says if I haven't done it in real life, I shouldn't do it on the screen."

In 1998, Natalie turned down a role in The Horse Whisperer, instead opting to do The Diary of Anne Frank on Broadway. She received a Tony nomination for her role as Anne. Natalie then turned down a role in Anywhere But Here (1999) because of a nude scene, but Susan Sarandon, who had co-star approval, asked that the scene be rewritten for Portman. Natalie went on to receive a Golden Globe nomination for her work in the film.

Natalie made the transition to adult roles on screen gradually, limiting her work onscreen as she studied at Harvard, but managed to fit in starring roles in Where the Heart Is (2000) and Star Wars: Episode II: Attack of the Clones (2002), as well as supporting roles in Zoolander (2001) and Cold Mountain (2003).

Natalie returned full time to acting in 2003 after earning a degree from Harvard University.

In 2005, at the age of 23, Portman picked up her first Golden Globe award and received her first Oscar nomination for her role in Closer (2004). Her role opposite Tobey Maguire in Brothers also received high praise from critics and earned her several nominations from various societies. In 2009 she picked up a Tribute Award from the Gotham Awards, for her "still young but already full career." Her portrayal as a ballerina who gets in touch with her dark side in Black Swan won her an Academy Award, a Golden Globe and a SAG award for Best Actress.

Next she starred opposite Chris Hemsworth in Thor: The Dark World (2013). More recently, she played the title role in the western shoot-em-up flick Jane Got a Gun (2016), took over the role of iconic first lady Jackie Kennedy Onassis in the biopic Jackie (2016), and co-starred alongside Lily-Rose Depp in the fantasy drama Planetarium (2016). She also made her directorial debut in A Tale of Love and Darkness (2016), an Israeli war drama that she also starred in and wrote.

For her work in Jackie, she earned numerous nominations for Best Performance by an Actress in a Lead Role, including nominations from the Academy Awards, BAFTA Awards, Golden Globe Awards and the SAG Awards.

A strict vegetarian since the age of eight, Natalie is married to French choreographer Benjamin Millepied, whom she met while filming Black Swan. Their son, Aleph Portman-Millepied, was born on June 14, 2011.