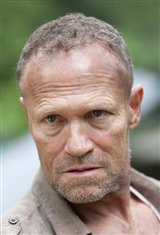 Born in Alabama, Michael Rooker moved with his eight brothers and sisters and their mother to Chicago following his parents' divorce. A skinny but tough kid, he studied martial arts for 10 years and it paid off. At first he was approached by bullies, but soon put a stop to that when it became clear he could take care of himself. He earned his Bachelor of Fine Arts degree from the Goodman School of Drama, then began landing roles in plays in Chicago, including Union Boys, The Crack Walker and The Hostage. He then moved to New York City, where he performed Off-Broadway in Beth Henley's Abundance.

Michael would go on to have supporting roles in popular films such as Sea of Love (1989) with Al Pacino, Days of Thunder (1990) starring Tom Cruise, Oliver Stone's JFK (1991) and Tombstone (1993) with Kurt Russell. Other film credits include Cliffhanger (1993) opposite Sylvester Stallone, Keys to Tulsa (1997), in which he stars with Eric Stoltz and James Spader, and The Bone Collector (1999) opposite Denzel Washington and Angelina Jolie.

On television, Michael has played in an episode of Showtime's noir series Fallen Angels as well as a recurring role in Miami Vice and a guest appearance on CBS' The Equalizer. More recently he played the recurring role of Merle Dixon on the mega-hit AMC TV series The Walking Dead. His portrayal of Darryl's older, dangerous, self-sacrificing brother became a fan favorite.

Series co-star Norman Reedus said Michael is a "true force of nature, you never (know) which direction (Michael's) headed... Once you think you know, he switches it up and turns everything upside down... He's a lot like that in real life." Once Michael's time on the series ended in 2013, the following year would find him in the role of Yondu Udonta in the wildly successful 2014 Marvel superhero film Guardians of the Galaxy and later reprising that role in the film's 2017 sequel Guardians of the Galaxy Vol. 2 as well as in 2018's Avengers: Infinity War.

The following year, he played a supporting role as The Big T in the horror film Brightburn (2019), starring Elizabeth Banks. He played Damon in the horror film Fantasy Island (2020), based loosely on the classic TV series of the same name. Upcoming films include Fast & Furious 9 (2020) and The Suicide Squad (2021).

Michael's talents as an actor have brought him voice work success as well, voicing characters for popular video games such as Call of Duty: Black Ops I and II, as well as playing the voice of his The Walking Dead character Merle Dixon in the game The Walking Dead: Survival Instinct. Michael has also dabbled in the director's chair with his 2012 horror film The Lost Episode and produced the 1998 film Brown's Requiem and A Table for One (1999).

In his spare time, Michael practices the Japanese martial art of Aikido to stay in shape and takes classes at a local Dojo. In 2013 he became involved in the anti-bullying campaign, The New F Word. He told Rock Cellar Magazine: "The 'F' stands for 'friend,' and I was approached by a friend of mine who wanted to know if I wanted to be a part of it and I said, "Shit yeah! I’ll be a part of it. I loved bullies as a young man. I enjoyed the bullies when they approached me, and I absolutely enjoyed breaking their noses."

Michael married his wife Margot in June 1979. They have two daughters, Lynn and Gillian, and one granddaughter.