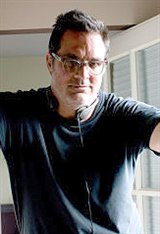 Born in England, Mark Pellington crossed the pond to work on his Rhetoric's degree at the University of Virginia, achieving it in 1984. After completing his studies, Mark started working for MTV's On Air Promotions department. There he began to develop a number of conceptual spots before leaving to become a freelance music video director.

Mark spent the next few years working with such artists as U2, Public Enemy and Alice in Chains. In 1992 he received numerous awards for his work on Pearl Jam's "Jeremy" video. But it was his work with INXS that garnered notice. He filmed the video "Beautiful Girls" and was offered the opportunity to work on a television special, Red Hot & Blue along with a number of seasoned directors. The experience led to more work in television directing other specials, including In Your Face, Alive From Off Center, Punch & Judy Get Divorced and the series, United States of Poetry.

In 1997, Mark took a chance and directed his first feature film, Going All the Way. The film, based on Dan Wakefield's bestselling novel by the same name, starred Ben Affleck and Jeremy Davies and was a hit at the 1997 Sundance Film Festival. Two years later, Mark released the thriller Arlington Road starring Jeff Bridges and Tim Robbins. The film was generally well received by critics and viewers alike, earning nominations from the Paris Film Festival and the Academy of Science Fiction, Fantasy & Horror Films.

He followed that project up with the sci-fi thriller The Mothman Prophecies (2002) with Richard Gere and Laura Linney, and then worked with Luke Wilson, George Lopez and Radha Mitchell on the dramedy Henry Poole Is Here (2008).

His latest works include three episodes of the crime drama series Blindspot (2015), the Shirley MacLaine, Amanda Seyfried and Anne Heche comedy The Last Word (2017), which screened at Sundance and the drama Nostalgia (2018) starring Bruce Dern and Ellen Burstyn.