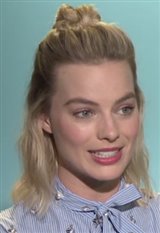 Margot Elise Robbie is a native of Australia. Born in Dalsby, Queensland, she enjoyed a quiet life on the Gold Coast before relocating to Melbourne at the age of 17 to pursue a professional acting career. She graduated from Somerset College in 2007.

After graduating, Margot took on her first acting role in Vigilante (2008). Director Aash Aaron was so impressed by her performance that he also offered her the lead role in his next film, I.C.U. (2009). At the same time, Margot was promoted to series regular on Australian soap opera Neighbours after landing a guest role on the show in 2008. She left the show in 2011 to pursue a Hollywood career.

Her audition for the new series Charlie’s Angels scored her a role on the short-lived Pan Am, which was cancelled after only one season. After that, the blonde beauty left television behind to focus on her Hollywood dream. She played Charlotte in the rom-com About Time (2013), and she impressed audiences and critics alike as Naomi in The Wolf of Wall Street. Her performance as Jordan Belfort’s beautiful wife earned her a Best Supporting Actress nomination from the Georgia Film Critics’ Association. Margot has also completed roles in Suite française opposite Michelle Williams and Focus, starring Will Smith. She has also been cast as Jane in the upcoming Tarzan remake opposite Alexander Skarsgård.

She was then seen in Whiskey Tango Foxtrot (2016), The Legend of Tarzan (2016), Suicide Squad (2016) and Goodbye Christopher Robin (2017). For her title role as figure skater Tonya Harding in I, Tonya (2018), Margot received her first Academy Award nomination in addition to nominations from the Golden Globes, SAGs and BAFTAs.

In 2020, she reprised her role as Harley Quinn in Birds of Prey (And the Fantabulous Emancipation of One Harley Quinn).