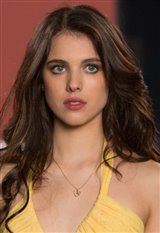 Born​ ​in ​Montana​ ​to​ ​​actress​ ​​Andie​ ​MacDowell and model Randy Qualley,​​ ​​Sarah​ ​Margaret Qualley​​ ​was​ ​familiar with​ ​the​ ​entertainment​ ​business​ ​at ​an​ ​early​ ​age, spending time with her mother on numerous film sets. After her parents divorced when she was five, Margaret moved with her mother and two older siblings to North Carolina, where Andie wound up enrolling her two daughters in ballet classes.

She decided to stay in New York and complete her high school education at the Professional Children's School, supporting herself by modeling for catalogues.

Despite her early film set experiences, Margaret didn't consider being an actor until she took an inprov class and fell in love with the process. At 18, while visiting her then-boyfriend Nat Wolff on the California set of the movie Palo Alto, Margaret was spotted by director Gia Coppola and cast as Raquel, the romantic rival of the lead character, played by Emma Roberts.

Margaret soon found an agent and in 2014, landed a starring role on the HBO series The Leftovers, playing the daughter of Justin Theroux's character. The series ran for three seasons and during a break from the show, she played the key role of Amelia Kuttner in the major motion picture The Nice Guys (2016), starring Russell Crowe and Ryan Gosling.

Also in 2016, she starred in a video for a new perfume, Kenzo World, directed by Spike Jonze. For the audition, he asked her to dance wildly, asking her to be a vampire whose body was taking over. She stomped and crawled to a frenetic dance song called "Mutant Brain" and found out shortly afterwards that she'd landed the role. The video has over nine million views on YouTube.

Margaret has been very busy since The Leftovers concluded, with a number of roles in major motion pictures. In Novitiate (2017), she played a young nun opposite Melissa Leo and a starring role opposite her ex-boyfriend, Nat Wolff, in Death Note (2017), which is based on a manga series. In The Vanishing of Sidney Hall (2018), she plays a role as a quirky girl named Alexandra opposite Logan Lerman and Elle Fanning.

Two years later, moviegoers were able to witness her work as directed by Quentin Tarantino when the film Once Upon a Time in Hollywood (2019) was released, starring Brad Pitt and Leonardo DiCaprio.

When she's not on location working, Margaret lives in Los Angeles with her older sister Rainey, who's a country singer, and their rescue dog, Books.