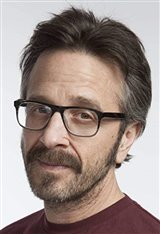 Marc Maron was born in Jersey City, New Jersey. He has one younger brother, and while his father was in the military, his family lived in various places, including Alaska and Albuquerque, New Mexico. Marc graduated from Boston University with a Bachelor of Arts in English Literature.

He started his career as a stand-up comedian in Boston and New York. Since his stand-up career was not enough to pay the bills, he started a podcast in 2009 called WTF with Marc Maron, which he still produces to this day.

Marc has frequently guest starred on shows such as Late Show with David Letterman and Late Night with Conan O'Brien.

In 2013 Marc began starring on his own sitcom, Maron, on IFC. The series was on the air for four seasons. From 2017-2019 Marc played Sam Sylvia on the Netflix series, GLOW. For his work on the show he received a nomination for best supporting actor at the 2018 Critics Choice Awards.

Most recently Marc voiced the character Snake in the hit animated movie, The Bad Guys (2022).