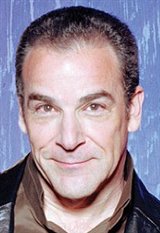 A talented stage and screen performer, Mandy Patinkin was born Mandel Bruce Patinkin in Chicago to parents Doris and Lester. His mother was a homemaker and cookbook writer while his father, prior to his death from cancer when Mandy was 19, operated a junk business called People's Iron and Metal Company. Mandy was their second child after their daughter Marsha.

As a young teenager, Mandy began singing in a synagogue choir. It was his introduction to music, which turned into a lifelong passion.

He studied at the University of Kansas before enrolling at Julliard. Although he dropped out of the prestigious drama school and never graduated, Mandy didn't lose his interest in acting. He made his Broadway debut in the 1975 production of Trelawny of the Wells, playing Mr. Arthur Gower. The roles of Player King/Fortinbras quickly followed in a 1975 Broadway production of Shakespeare's Hamlet. In 1976, he played Major Robert Steele Strong in the off-Broadway play Rebel Women. He returned to Broadway to play Mark in the 1977 production of The Shadow Box.

Mandy's first on-screen part was in the comedic TV special That Thing on ABC (1978). He followed that with a small role in his first feature film, The Big Fix (1978), which is a comedy starring Richard Dreyfuss. Also in 1978, Mandy worked on an episode of the comedy series Taxi with Judd Hirsch and Danny DeVito.

In 1979, Mandy originated the role of Che Guevara in the Original Broadway Production of the musical Evita. The production went on to be a huge hit and was critically very well received. Mandy won a Tony Award for Best Featured Actor in a Musical in 1980 for his role.

On film, he played the role of Tateh in Milos Forman's eight-time Oscar-nominated drama Ragtime (1981) alongside James Cagney and Elizabeth McGovern, appeared in Sidney Lumet's drama Daniel (1983) with Timothy Hutton, and acted in the Oscar-winning musical Yentl (1983) starring Barbra Streisand. For playing Avigdor in the latter film, he won his first Golden Globe nomination in the Best Actor - Musical or Comedy category.

By 1984, Mandy was back on Broadway, starring in the original Broadway production of Stephen Sondheim's Pulitzer Prize-winning musical Sunday in the Park with George.

Following his Golden Globe nod, Mandy worked with Glenn Close in the comedy Maxie (1985) and Anna Paquin in the animated adventure flick Castle in the Sky (1986). Also in 1986, he won a lead role opposite Meryl Streep in Mike Nichols' film Heartburn. Unfortunately, the director ended up firing him and replacing him with Jack Nicholson.

Mandy moved on well, though, and worked with Robin Wright in Rob Reiner's family film The Princess Bride (1987). His role as world-renowned swordsman Inigo Montoya in the film would become one of his best known.

Over the next few years, Mandy acted alongside Kelly McGillis and Jeff Daniels in the thriller The House on Carroll Street (1988), James Caan in the sci-fi film Alien Nation (1988), and Warren Beatty and Madonna in the Oscar-winning movie Dick Tracy (1990).

He kept busy in 1991, finding work in three feature films: the drama True Colors with John Cusack and James Spader, the Chopin biopic Impromptu with Hugh Grant and Judy Davis, and the drama The Doctor with William Hurt and Christine Lahti. He also landed the role of Archibald Craven, the grief-stricken widower and father of a disabled boy, in the original Broadway production of the musical The Secret Garden, which opened to rave reviews. It won three Tony Awards in 1991, out of six nominations.

Mandy reunited with James Spader for the drama The Music of Chance in 1993. In the same year, he also worked with Michael J. Fox in the family comedy Life with Mikey.

In 1994, Mandy nabbed one of the most lucrative parts of his career. He began playing thorny Dr. Jeffrey Geiger in the series Chicago Hope alongside Adam Arkin and his co-star from The Doctor, Christine Lahti. For his work on the show, Mandy was nominated for a Golden Globe and won an Emmy in 1995, and earned a second Emmy nod in 1999. The entire cast of Chicago Hope was recognized with SAG Award nominations in 1995 and 1996.

Famously, Mandy quit the show in 2000 when he couldn't stand being away from his family. The series was shot in L.A. while Mandy's loved ones lived in New York.

In total, Mandy appeared in 60 episodes of Chicago Hope.

Mandy had another brush with Emmy in 1996 when he was nominated for his work on an episode of the Garry Shandling comedy series The Larry Sanders Show. The program ran from 1992-1998.

In 1997, Mandy worked with Richard Harris and Salma Hayek on the TV movie The Hunchback before teaming up with Harvey Keitel and Mira Sorvino for the drama Lulu on the Bridge in 1998. The following year, he worked with Vanessa Williams in the family film The Adventures of Elmo in Grouchland.

Mandy guest starred in episodes of two shows in 2001. He appeared in the Emmy-winning Boston Public and Golden Globe-nominated Touched by an Angel. Also in 2001, he worked with Benjamin Bratt in the drama Piñero.

In 2003, he played a part in an episode of Law & Order before landing the role of Rube Sofer in the series Dead Like Me. Mandy would act in all 29 episodes of the Emmy-nominated Showtime series, which ended in 2004.

The following year, he snagged the part of Jason Gideon in the crime drama series Criminal Minds, which follows FBI criminal profilers and the cases they tackle. However, after two seasons on the show and 47 episodes of work, Mandy left the series behind in 2007. He felt the content was too heavy.

In an August 2013 New York Times Magazine feature on Mandy, an executive producer on Criminal Minds addressed the actor's departure. He said Mandy was "the father who goes out for a carton of milk and then never comes home." The article also states that Mandy wrote apology notes to his cast mates, including Matthew Gray Gubler and Thomas Gibson.

Mandy returned to film in 2006 with the drama Choking Man and in the same year, teamed up with Whoopi Goldberg and Ed Helms in the animated film Everyone's Hero.

In 2010, he worked with Emma Roberts in the crime thriller 4.3.2.1. before scoring another one of his most notable roles in 2011 when he began portraying CIA agent Saul Berenson. The part came in the series Homeland.

As research for his performance in the series, Mandy met with a former CIA agent and chatted with his two daughters. The work he has done on-screen earned him a Golden Globe nomination in 2013 and Emmy nominations in 2013 and 2014. The cast of Homeland has garnered nominations at the SAG Awards in 2013, 2014, 2015 and 2016.

Mandy's co-star in the series, Claire Danes, opened up about working with the Chicago native in the New York Times Magazine feature previously mentioned. She said, "Mandy is obviously verging on legend. He has that ineffable, magical something that's impossible to identify."

In 2011, Mandy provided the voice of the character Basil in the animated film Jock the Hero Dog, which also features the voices of Donald Sutherland and Helen Hunt. He then found work in 2013's Oscar-nominated The Wind Rises, another animated picture.

Mandy teamed up with Zach Braff for the dramedy Wish I Was Here in 2014 and then worked on the drama Ali and Nino in 2016. He also appeared in the dramedy The Queen of Spain (2017) with Penélope Cruz, the animated film Smurfs: The Lost Village (2017) with Julia Roberts and Rainn Wilson, among others, and the drama Wonder (2017), in which he again worked with Julia Roberts.

Most recently, Mandy returned to the big screen in the romantic drama Life Itself (2018) alongside Antonio Banderas and Annette Benning.

Mandy's accolades aren't restricted to his work in front of the camera. Aside from winning a Tony for Evita, the accomplished stage actor also earned Tony nominations for his performances in The Wild Party and Sunday in the Park With George. The latter production was helmed by Stephen Sondheim and James Lapine, and in The New York Times Magazine feature previously alluded to, Stephen said Mandy's voice is "a gift from God" while James called him "myopic," "unbelievably intense," and "maniacally focused."

The actor, who is a prostate cancer survivor, has ventured into the music business as well. He released his first solo album in 1989 and as of 2017, has released an additional six.

A supporter of several charities including Doctors Without Borders and Americans for Peace Now, Mandy has spoken openly about his struggle with depression, his attempts at therapy, and the negative experiences he's had with treating symptoms through medication.